There are a variety of biomaterials that are used for aesthetic facial implants. The vast majority are either solid silicone or Medpor (porous polyethylene) all around the world. There are advantages and disadvantages for the use of either biomaterial and there are an equal number of advocates for each as well.

Silicone is the Coke of facial implants because it is less expensive to manufacture, comes in a wide variety of styles and sizes, can be easily modified during surgery and its smooth surface and flexibility allows for  a relative ease of insertion. Its biologic disadvantage is that the surrounding tissues do not adhere to the surface.

Medpor is the Pepsi of facial implants as it costs more to manufacture, has a more limited number of implant options, is harder to modify during surgery (although not impossible) and its rougher surface texture and stiffer material construct increases the difficult of insertion through small tissue tunnels. Its biologic advantage is that it develops a brisk soft tissue adherence and purportedly can develop some bone ingrowth.

I have had the opportunity over the past ten years to remove over 250 Medpor implants from the temples, brow bones, cheeks, orbital rims, maxilla and all along the mandible in revision surgery that most commonly involved their replacement. From this experience I can make numerous observations from their removal. 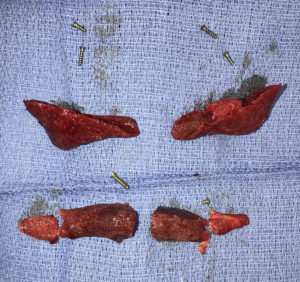 First, all Medpor facial implants are capable of being removed. I have heard and read that they are impossible to remove or very tissue destructive to do so. But that is not accurate. They are certainly far more difficult to remove than silicone implants and, by comparison, extremely difficult to do so. But without that comparison they can be removed…just don’t expect it to be quick and it takes diligence and care to limit surrounding tissue damage. Also be prepared for screw removals as there is often an inordinate number of screws used for their fixation.

Second, even with the significant tissue adherence there is still a tissue capsule that is created on both its outer and inner surfaces. The key finding is that a soft tissue interface (capsule) develops between the bone and the implant. (just like silicone) I have always seen this capsular interface and have never seen any bony ingrowth. Thus it is not an implant that develops osseointegration. The only materials that do that in the craniofacial area are titanium and hydroxyapatite. 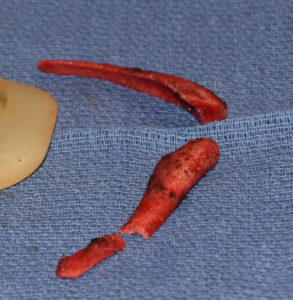 Fourth, the implantation of the material makes it softer. When originally placed Medpor, a synthetic plastic, is very firm and not easy to carve even with a scalpel. But after being in the body for some time the ingrowth of tissues and perhaps water absorption into the material makes it soften and is much easier to carve. This is relevant if one wants to try and trim a Medpor implant in situ. (although it may in some cases produce a better aesthetic outcome if the implant is actually explanted, modified and then reinserted)

Lastly, passive bony remodeling under Medpor implants in the jaw (often erroneously called ‘bone erosion’) occurs with some frequency in the chin and jaw angles. It is not an exclusive finding of silicone implants. This is a normal biologic adaptation to the pressure of an overlying implant which is most commonly seen all along the jawline. It has almost never has any clinical relevance  and is manifest as an imprint on the underlying bone of the implant’s shape and sometimes bony growth upper its edges.

In conclusion tissue adherence is the biologic differentiator of Medpor facial implants. Such a biologic response is both a blessing and a curse. While it maintains the implant in an intraoperatively placed position, it also makes it more challenging to remove and/or modify.