Background: The ear has a complex shape which is exposed to a variety of congenital deformities. The most severe congenital ear deformity is that of microtia in which the ear is either severely deformed or even largely missing. In most cases remnants of the ear are present but it is significantly misshapen and shrunken in appearance. The external auditory canal is almost always absent.

The reconstruction of the microtia ear has a long surgical history in plastic surgery fating back to the 1970s and 1980s where the introduction of a staged approach using autologous tissues was introduced. The cornerstone of the procedure was the initial placement of a rib graft framework. Around this cartilage base the rest of the ear is reconstructed including the lobule, postauricular sulcus and even the tragus.

More recent surgical microtia advancements has been the use of a synthetic implant framework instead of rib cartilage. This approach has the advantage of usually creating a better looking ear but also has the short and long-term risks associated with an implant that has a relatively thin overlying soft tissue cover. Some view its use as controversial but it is better viewed as an alternate microtia treatment option that has its own distinct advantages and disadvantages.

Case Study: This seven-year old male child presented with a significant microtia deformity with the right ear severely misshapen but with a lobule present. The external auditory canal was missing. 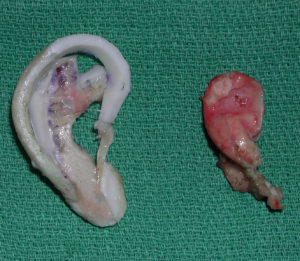 Under general anesthesia a first stage autologous ear reconstruction was done using rib cartilage. The entire misshapen ear cartilage was removed and a new rib graft framework inserted. The difference in the size and shape of the natural vs reconstructed ear shape could be seen. This speaks to why the use of the smaller and deformed ear cartilage is not useful in its reconstruction. 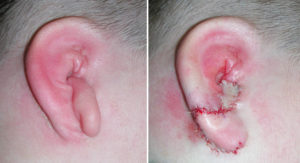 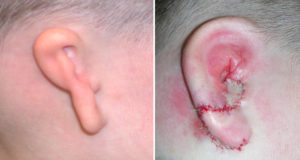 A second stage ear reconstruction procedure was done, rotating the misplaced ear lobule downward over the end of the cartilage framework. A small skin graft was placed over an area devoid of skin from the lobule rotation.

These first two stages set the general shape of the reconstructed ear. The subsequent stages of postaurkiculat sulcus release and tragus reconstruction are a bit more ‘optional’ although most patients do progress to releasing the ear from the side of the head with a skin graft.

1) Microtia is a congenital ear condition which can be treated by surgical reconstruction using rib cartilage grafts.

2) Microtia reconstructions are done in stages to allow for cartilage placement and adequate soft tissue coverage.

3) Removal of residual deformed ear cartilage is important prior to rib graft placement.