Background: Chin augmentation with implants has a long successfully history. While standard chin implants work for many patients, significant chin deformities do not fare as well. The shape and size of off-the-shelf implants are made for more modest to moderate aesthetic deficiencies primarily in the horizontal direction.

In the more severe horizontally deficient chin, which in many cases is really a manifestation of a mandibular growth deformity, the chin often has a dimensional deficiency that is not just in the forward dimension. As the ramus of the mandible fails to grow vertically long enough the jaw angles remain high and the mandibular body tilts downward. This creates a short but vertically long chin. Placing a standard implant on the front part of the chin will bring its projection forward and downward…not an ideal aesthetic change.  While the implant can be placed higher up on the front edge of the chin, this can create an exposed lower edge of the chin bone. This is why a sliding genioplasty is usually favored in this type of chin deformity as it can vertically shorten the chin  as it is brought forward.

Very horizontally short chins in females poses a unique challenge for implants.  Large chin implants have long extended wings which end up widening the chin significantly in the front view…an aesthetic problem that most women will find unacceptable. Women prefer more narrow chin widths and there are not standard implants that can offer enough projection but with a narrow base width. 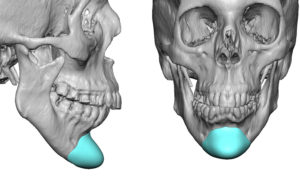 Case Study: This female had a chin implant history of five previous surgeries over the years to find an acceptable chin augmentations result. She had a very short lower jaw, a class II malocclusion, and previous standard chin implants which were modified to try and give enough horizontal projection but not be overly wide. Her fifth and last surgery involved a custom chin implant made from a 3D CT scan. It had an uncommon design with a lot of horizontal projection, a narrow base and an almost cone-like shape.

She reported that this custom implant produced a satisfactory aesthetic change right after surgery. But with the first week after its placement, the chin shape changed and her chin become vertically long and lost its horizontal projection. She had a CT scan which showed that the implant had become displaced, basically falling of the chin and rotating 90 degrees. This gave her a ‘pharoah’s chin or false beard look. 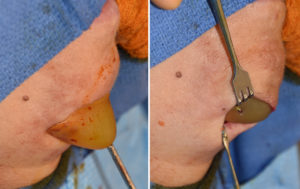 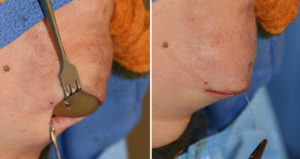 Under general anesthesia and through her existing submittal incision, the displaced implant was removed through a thin overlying soft tissue coverage. A capsulectomy was done on the bone and releasing capsulotomies were done on the surrounding soft tissue pocket lining. The implant was reinserted and positioned as it was designed and secured with two 2.0mm screws through the implant into the bone. A capsular flap was raised from the inferior side of the soft tissue pocket and added as another tissue layer over the implant prior to skin closure. 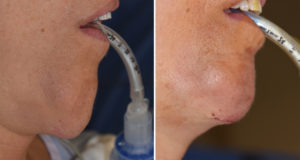 Her immediate result showed how the chin was designed to look from the custom implant design.

Screw fixation of facial implants in general, and chin implants in particular, has often been debated. But it is important to remember that an implant over the front edge of the chin is not particularly stable. This can become more so based on the implant’s dimensions. While a custom chin implant ensures that the desired shape and size is achieved, there is no assurance it will stay where it is designed to be placed. In implants that look less positionally secure, double lag screw fixation ensures this will not be a postoperative problem. Repositioning of any chin implant malposition probably merits screw fixation to prevent recurrence.

2) Any form of a chin implant completely falling off the chin bone is rare but in a high horizontal:vertical base ratio implant that risk is accentuated.