Background:  Cryptotia is a well known congenital ear deformity whose appearance is marked by loss (disasppearance) of the upper part of the ear. The upper pole of the ear is buried under the temporal skin to varying degrees. While the ear can be pulled out from underneath the skin it will return to its buried position once released. While it can occur in any race, it is known to be more common in Asians. Besides its aesthetic appearance, the lack of a sulcus between the ear and the side of the head make wearing glasses difficult.

Cryptotia has been classified into two types based on the degree of cartilage and skin deformations. In type 1 the upper portion of the ear is buried under skin with potentially the body and superior crus of the antihelix compressed together. In type 2 the cartilage deformation is more severe as the body of the antihelix is contracted and the inferior crus of the antihelix even bent over. While this classification is a bit simplistic with numerous cartilage variants amongst the types its main feature is that no separation between the upper ear and the side of the head exists.

The treatment of cryptotia depends on its type. In type 1 release of the ear has been accomplished by skin grafts and various adjacent tissue rearrangement methods. (e.g., z-plasty, V-Y plasty) In type 2 the constricted cartilage must be managed by cartilage grafts or interpositional implants after cartilage release. 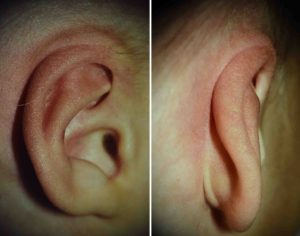 Case Study: This female child had a type 1 cryptotia deformity of the right ear. The ear cartilage was normal with no loss of vertical ear height or shape.

Under general anesthesia an incision was made behind the buried portion of the ear for the release. The release was completed to the point where the upper pole of the ear stood out freely. This left a skin defect behind the ear into which a full-thickness skin graft was placed after being harvested from the groin crease. 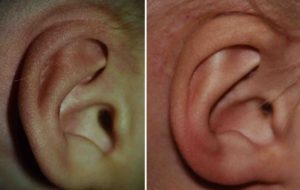 Healing of the skin graft allowed for the creation of a postauricular sulcus and a permanent separation of the ear from the side of the head.

1) Cryptotia is as congenital ear deformity where the upper part of the ear is buried under the skin.

2) In type 1 cryptotia a full-thickness skin graft is used to release the ear from the side of the head and maintain its released position and the creation of a postauricular sulcus.

3) Cryptotia can be one of the most straightforward congenital ear deformities to treat.