Background: The shape of the head can be quite variable amongst different people. While often perceived as a smooth oblong shape, some people are not as blessed with such a smooth and symmetric skull. The skull can have a large number of asymmetries and deficiencies that may be of concern to the patient but unperceived by others due to coverage by hair.

One skull dimension is that of width. The width of the skull is composed of the temporal, parietal and upper forehead areas which is composed of a combination of bone and muscle. The width of the head can affect its appearance in short hair and can even affect how tight or loose hats and other head wear feel. While there is no exact number for ideal head circumference, the more practical issue is how it looks and feels.

Changing the width of the skull is often perceived as not being possible. But with today’s 3D implant design technology a wide variety of skull augmentation possibilities exist. 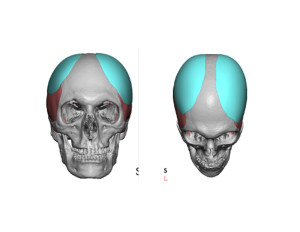 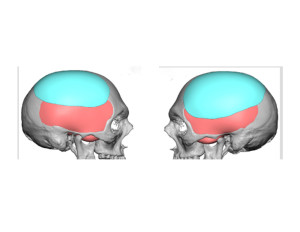 Case Study: This 65 year old male had been bothered his entire life by a head shape concern.  He had trouble wearing hats and he had a noticeable asymmetry of his forehead. Since his hairline had receded a bit the forehead asymmetry became more apparent. The sides of his head were too narrow at the junction of the sides and top of the skull along the temporal lines. This caused a backward slope to his forehead which was most severe on his left side. Using a 3D CT scan, bilateral custom skull implants were designed to add volume and correct the asymmetry. It was very important that the front edge of the skull implants had a very feather edge so there was not a visible implant transition. 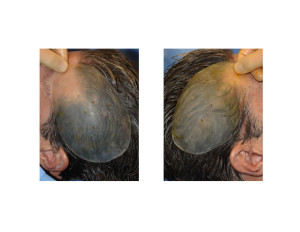 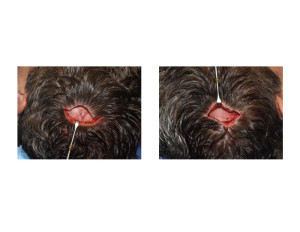 Under general anesthesia he has his custom skull implants inserted through 5 cm long incision at their back end. The implants had perfusion holes placed in them and were inserted in a rolled fashion. Once inserted they were unrolled, positioned and secured with a single 1.5mm microscrew per side.

Widening of the upper sides of the head can be successfully done through the use of custom skull implants. The implants will sit partially on bone and partially on the temporalis muscle fascia. They must be designed to have very thin edges all the way around the implant. With thicknesses of even 7mm, a total upper head width change of 15mms can make a very noticeable change.

1) Narrow head widths can make wearing hats difficult and can cause forehead asymmetry.

2) Paired custom skull implants can add width at the upper temporal and sides of the top of the head.

3) Custom skull implants can be inserted through fairly small incisions at the back of the head.