Background: The shape of the skull is seen as most aesthetic when it has a curved shape across the top from the front view. This curved shape can be altered by a variety of congenital deformities. One of the most common is an alteration of the midline sagittal suture. When complete premature sagittal suture closure occurs, the entire skull shape becomes very elongated and very narrow. (scaphocephaly or premature sagittal suture craniosynostosis) But more commonly partial or minor variations of sagittal craniosynostosis occur.

With incomplete or minor variations of premature sagittal craniosynostosis occur, a prominent sagittal ridge may develop. It is not significant enough to cause an overall alteration of skull shape, but does present as a visible raised midline bony ridge. It can occur anywhere along the original sagittal suture location.

Case Study: This 30 year-old male was bothered by a prominent midline ridge on the front of his head. From the widow’s peak of his hairline back along the midline of the skull for 12 cms,  the raised ridge created a triangular shaped head from the front view. 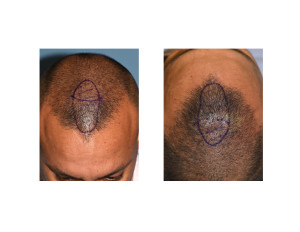 Under general anesthesia and through a small curved (5 cm) scalp incision, a handpiece and burr was used to smooth down the prominent bony ridge. The midlien ridge was reduced down to the diploic space of the bone, about 5mm to 6mms. The scalp incision was closed in layers with dissolveable sutures after a drain as placed. The drain was removed the following day after putting out about 30cc of blood. 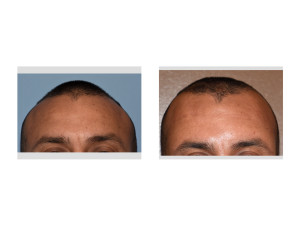 His postoperative swelling was moderate and this is how he looked within one day after surgery. The reduction in the midline ridge was immediately evident. He could walk around and really did not look particularly swollen or ‘surgical’ in appearance.

Reduction of the anterior sagittal ridge skull deformity can be effectively done by a bone burring technique. The key is to perform it through the smallest scalp incision possible. Special instruments and a handpiece and burr are used to remove the raised bony ridge as low as possible, blending it into the surrounding skull bone.

1) A sagittal ridge skull deformity consists of a midline raised ridge of bone anywhere from the forehead to the back of the head.

2) An anterior sagittal ridge starts at the old anterior fontanelle  and extends back along the skull for a short distance.

3) A bone burring technique can be effective at reducing the height of the sagittal rudge skull deformity.