Case Study: Breast Augmentation and Its Effects On Stretch Marks

« Case Study: The Role Of Limited Facelifts For The Correction Of Jowl and Neck Aging
The Energing Trend Of Stretched (Gauged) Earlobe Repair »

Background:Breast augmentation works because it is a synthetic implant that makes the breasts bigger. While it is true that the role of the plastic surgeon is critical to get good implant placement in the proper position and as symmetrically as possible, but in the end the implant itself plays a major role in the final breast appearance. To a large degree, and often not appreciated by patients, is that implants merely magnify what the breasts initially looked like.

Stretch marks are usually the result of rapid stretching of the skin. They occur because the underside of the skin, known as the dermis, can not take the pressure from the rapid stretching and it tears. Stretch marks are, therefore, a form of scarring in the skin. But because they are located on the underside of the skin, they are generally resistant to improvement by any form of known treatment. While initially appearing as red or purple, they often fade in color to white.

Because pregnancy causes some degree of loss of breast tissue, many women after they are finished having children desire breast augmentation. Pregnancies have left them with smaller deflated breast mounds that often have stretch marks as well. A very relevant question from them is what will happen to their stretch marks after getting breast implants. Will the stretch marks look worse? 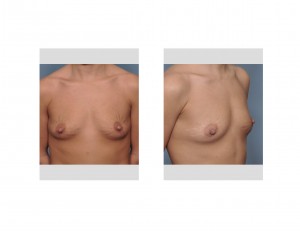 Case Study: This 23 year-old female from Columbus Indiana wanted breast implants to improve the size and shape of her breasts. She had been through two pregnancies in the past four years and had lost most of her natural breast tissue. She also had very severe stretch marks that radiated widely out from her nipple-areolar complexes, were wide and many in number and were white in color. While she wanted larger breasts regardless of how the stretch marks would appear afterward, her question about what would happen to them after surgery was common. 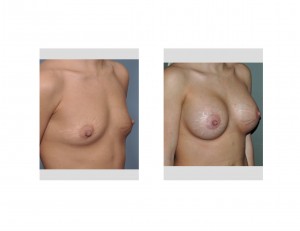 Under general anesthesia, she had saline breast implants placed through a transaxillary approach. She was very small in size (5’ 1”, 102 lbs) and the implants were inflated to 375cc which stayed within the dimensions of her natural breast base diameter. During surgery it could be seen that her breast stretch marks did get wider from the expansion of the implants but they did not look worse in appearance. 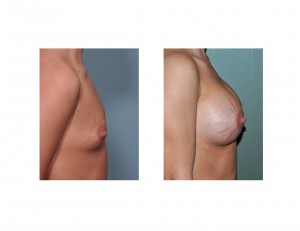 When seen at one month after surgery, her breast implants were symmetrically placed and of acceptable size to her. Her stretch marks were still very apparent and actually a bit more red than before surgery. When comparing before and after photos, it could be stated her breast augmentation neither improved or made worse her pre-existing stretch marks.

1) Stretch marks from pregnancy are common findings on many women considering breast augmentation. There is usually the concern that their appearance may be worse after surgery.

2) The expansion of the breast skin from implants does widen stretch marks but does not usually make them look worse in appearance.

3) Some stretch marks may initially get more red right after breast augmentation but this fades with time and skin relaxation.