The adornment of ears has been around since the dawn of civilization. Women and men have been putting all sorts of jewelry on ears from the top of the helix down to the earlobe. In what some may consider out of the ordinary or more extreme, the non-cartilaginous portion of the ear (earlobe) has even been split, severed or expanded in the interest of aesthetic enhancement.

When one thinks of changing the size of the earlobe, thoughts are given to people from some remote island or tribes from more distant lands. But the trend of earlobe expansion that has been seen in the past ten years, that of gauging or inserts into the earlobes, is now commonplace right here in the U.S. While everyone is entitled to their own sense of beauty and body modification, expanded earlobes with large central holes with or without inserts is usually not going to be a lifelong expression for most people.

As a plastic surgeon I am seeing more young men present for surgical correction of the stretched earlobes. The most common reasons are either for employment or job promotion, entering the military service or they simply are tired of them. The first two are forced upon the person by having to mold into the conformity of the organization. The last reason is one in which one wants to undo a generational fashion statement that now makes one self-conscious with a lot of saggy earlobes. Such an appearance, as unfair as it might be, creates an impression amongst some that they know who and what you are. 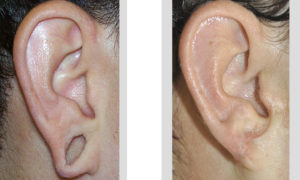 Whatever the motivation for change, plastic surgery correction of stretched earlobes is an easy problem to fix. Stretching the earlobes creates too much earlobe tissue, even if the outer rim of it can be quite thin. It is always better to have too much tissue in which to do a reconstruction than too little.This is a basic axiom in plastic surgery. While the large amount of floppy earlobe tissue and its central oblong hole may look like an impossibility from which to create a unified smaller earlobe, it is actually straightforward to do. It can be done in the office under local anesthesia in less than an hour for both earlobes. So what may have taken a year or so to create by steadily increasing the gauge of the disc inserts can be undone in one hour of precision reconstruction to make the earlobe look normal again.

Recovery from such earlobe reconstruction is very minimal if at all. I use dissolveable sutures on both sides the earlobe which require no removal. No dressings are used and one only applies antibiotic ointment for the first week after the procedure. Showering, washing one’s hair and all normal activities can be done without interruption. Patients report no pain, bruising and minimal swelling. The earlobe looks normal immediately. Patients interestingly do report the feeling of ‘phantom lobes’, much like that of phantom limb syndrome after amputations. But there seems to be no problem adjusting back to what looks very similar to their original earlobes, albeit with a tiny vertical scar in the earlobe close to its attachment to the face.