Background:  Congenital ear reconstruction, like is needed in microtia, is challenging due to the tissue deficiencies which is primarily the cartilage framework. This can be overcome in many cases by the natural stretch of the overlying and surrounding tissues, which while deficient, are pliable and elastic. In more severe cases of microtia a first stage tissue expansion may be needed but this is not necessary in the majority of patients.

As difficult as microtia reconstruction is, the burned ear can pose an even greater challenge. While the cartilage deficiency is usually far less,  the overlying and surrounding skin is quite different. It is both scarred and inelastic as well as deficient. It simply won’t stretch and will not expand unless it is far from the burn injury site. While the use of rib cartilage is still necessary (an implant should almost never be used in burn east reconstruction), it is even more important to create adequate soft tissue coverage of the ear framework. Options include tissue expansion of the surrounding skin or the use of temporalis fascia flap and a skin graft.

One unique feature of burn ear reconstruction, unless the ear lobule is present, is that it can not usually be created because of the lack of skin that can be mobilized. As a result one has to either accept an ear reconstruction without a lobule or extend the cartilaginous ear framework to make a semblance of the lobule.

Case Study: This unfortunate male sustained a 70% total body surface area burn that included much of his face, scalp and both ears. He was able to be resuscitated and skin grafted and eventually went home after four months of acute burn care. At one year after his initial burn injury he desired to have his ears reconstructed. What remained was an intact external auditory canal and concha with most of the outer helical rim and antihelical cartilages gone.(melted) 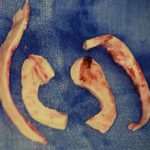 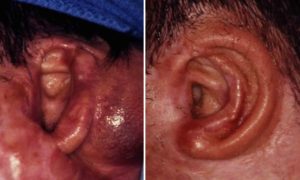 It was first necessary to create skin coverage through the use of a small tissue expander at the postauricular surface. Unlike traditional tissue expansion, subsequent inflations must be done very slowly and in small incremental volumes to prevent skin breakdown. Once good expansion was achieved cartilage rib grafts are used to create an implantable ear framework. No attempts made secondarily in sever ear burns to secondarily release and raise the ear framework for projection from the side of the head.

Burned ear reconstruction is difficult due to the lack of both sufficient and supple skin coverage. If adequate good quality postaurucular skin is available a first stage tissue expansion can be done. If not the possibility of a pedicle fascial flap should be considered.

1) Burned ears present a unique reconstruction challenge because of both quantity and quality of skin coverage.

2) Because of the lack of adequate skin coverage a first stage tissue expansion may be needed.

3) An autologous reconstruction is needed using rib cartilage to create the ear framework for the second stage.