Background: Calf augmentation using either a synthetic implant or fat injections is a well known surgical procedure to increase the prominence of the calf muscle. While many people think of the typical calf augmentation patient as a body builder or an athlete, aesthetic enhancement of normal calf muscles is only one reason to have the procedure. The other reason calf implants are done is for congenital deformities or obvious developmental asymmetries. Such deformities can include club foot, spina bifida and even polio.

Clubfoot is a well recognized lower leg deformity which is reported to be the most common birth defect. Medically known as congenital talipes equinovarus, the involved foot looks like it has been turned inward at the ankle. It occurs half the time in both feet at birth and more frequently in males. The calf (gastrocnemius) muscle is always smaller on the affected foot. Besides the issue of less functional use, studies have shown that the smaller size of the gastrocnemius muscle is due to wasting of the calf muscle from a reduction in the number of muscle fibers rather than their size.

When occurring on one side, clubfeet patients have a much smaller muscle than on the normal leg. When occurring in both feet, the calfs (as well as the entire leg) can be extremely thin. The calf muscle is so atrophic that there is a straight line from the inner knee straight down to the ankle without the usual calf muscle bulge seen in the frontal view. This is a source of embarrassment for many patients and will often prevent them from wearing shorts or otherwise exposing their calfs in public.

Case Study: This 23 year-old male was born with bilateral clubfeet and had been through many years of physical therapy, splints and achilles release surgery. He had thin upper thighs and very thin calfs that tapered inward from below the knee to the ankle. His skin was very tight around his calfs. While he ideally could have aesthetically benefited by both medial and lateral calf implants for both legs, the tightness of his tissues made that consideration too risky for fear of a compartment syndrome after surgery.

Under general anesthesia in the prone position, 3.5 cms long incisions were made in skin creases behind the knees at the inner half. Dissection was carried down to the muscle fascia where, in a stairstep fashion, fascial incisions were made well below the level of the skin incisions. An instrument dissected out a subfascial plane over the medial gastrocnemius muscle where solid soft silicone elastomer calf implants (15cm long x 5 cm wide, 135cc volume) were placed. the fascia and skin were closed in separate layers. He was dressed with tapes for his incisions and ace wraps for his calfs. The procedure was completed in one hour. 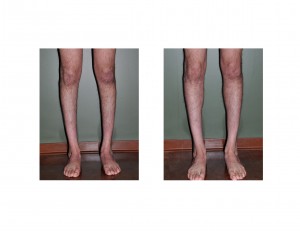 He rested his legs for the first few days, keeping his legs elevated. His recovery occurred over the next 3 weeks during which the calf muscles became used to having an implant sitting on top of it and the overlying skin stretched a bit. Returning to normal walking gradually occurred although a bit slower in the club foot patient who already had comfortable walking issues beforehand. His results showed a visible enlargement in his inner calf size that was proportionate to his thighs. 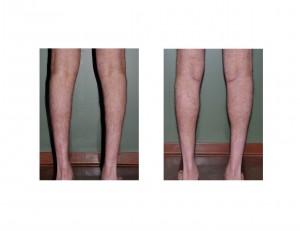 Calf implants in the clubfoot patient provide an immediate improvement in calf size. Fat injections are often not an option if they do not have any significant amount of fat to harvest in thinner patients. It is tempting to use larger sizes of calf implant or even two implants per leg but the tightness of the surrounding skin makes this a more risky approach in the patient with an atrophic overall calf. A larger size or an additional implant can be placed at a later date if desired.

1) For the clubfoot patient, calf augmentation with implants can provide a immediate and visible change in atrophic calf size.

2) Calf implants are placed on top of the muscle under the fascia in the inner calf muscle to get the most visible effect.

3) Calf implant augmentation is a very straightforward procedure that is accompanied by a longer recovery than the simplicity of the operation would suggest due to lower extremity dependency and function.