Background: The chin has a major impact on the appearance of the lower face. While most think of it as only from a horizontal projection perspective, its frontal shape has a major influence on the gender identification to whom it is attached. Men often have strong more square chin shapes in the front view while it is usually perceived as more feminine to have a narrow and or heart-shaped chin.

It is not rare for either a women or in male to female facial feminization surgery to make an effort to narrow the chin. There are a variety of methods to accomplish the bone removal needed, either by direct lateral bone reduction (ostectomies) or by an osseous genioplasty technique. (wedge reduction) Each has their own advantages and disadvantages but the more extensive genioplasty approach is usually indicated when there are other dimensional changes needed in the chin as well. (vertical and horizontal)

Case Study: This 31 year-old male to female patient was having a variety of facial feminization procedures from brow bone reduction to rhinoplasty. One of the changes that was requested was a narrowing of the jawline to reduce a square chin to a more narrow and softer one. 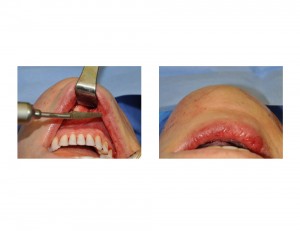 Under general anesthesia, an intraoral high vestibular incision was made and the chin bone exposed by muscle and periosteal elevation. A vertical bone cut of 4 to 5mms was made from the mid-body of the mandible to a point just lateral to the center of the chin, protecting the mental nerve on both sides. This removed along strip of bone along the sides of the chin and anterior jawline. Some additional bone smoothing was done with a burr to smooth out any rough edges. The narrowing effect was immediately apparent when the the first side of chin was done. 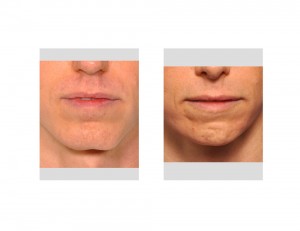 Recovery from chin narrowing surgery does involve a fair amount of swelling that takes a full four to six weeks to completely resolve. One can tell when all swelling is gone when the feeling in the chin is norma again and it feels soft and supple again. 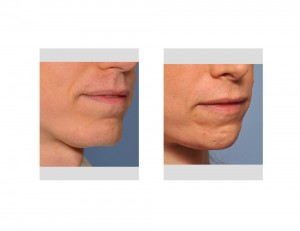 Narrowing of the wide chin or the desire to have a more narrow chin can be done by a by lateral ostectomy technique if no horizontal or vertical changes are needed. This type of ‘bony’ chin procedure is different from the sliding genioplasty as bone is removed rather than cut and relocated. It can be remarkable how a small amount of bone removal can change the shape of the chin in this narrowing technique.

1) The wide chin can be narrowed for either a softer jawline or to help feminize a face.

2) The width of the chin can be narrowed without a genioplasty by lateral tubercle ostectomies.

3) The intraoral approach for chin narrowing ostectomies leaves no scar but takes a while to see the final result due to prolonged swelling.