Background:  The eyes are very good indicators of how the face is aging being the first to show its signs. Aging first starts around the eyes and continues to progress as one gets older. The frequent movement of the eyelids and the thinness of the skin makes for an often early onset of wrinkles. Eventually the thin eyelid skin develops excess skin or skin rolls that can hang down onto the upper eyelid lashes and below the lower eyelid lash line.

The one tissue component of eyelid aging that can be overlooked, literally, is the underlying fat. This is particularly relevant in the lower eyelid where various fat pockets can come forward as herniations through the orbital septum. This herniated eyeball fat presents as puffiness or bags of the lower eyelids which is often a bigger aging problem than that of excess skin. Lower eyelid fat herniation can become quite severe in the patient who has a natural proclivity for this anatomic derangement as evidenced by having puffy lower eyes even when they were young.

Correction of the puffy eyes requires blepharoplasty or eyelid surgery. The term blepharoplasty represents a spectrum of progressively invasive eyelid techniques from the skin down to the fat and canthal tendons. In its fullest expression, which is needed in the more advanced aging patient, blepharoplasty surgery must encompass skin and fat removal and orbicularis muscle suspension and lateral canthal tightening.

One of the concerns of women undergoing blepharoplasty is that they will have an overly tightened and unnatural look. They can point to numerous celebrities that have that ‘look’. Conversely plastic surgeons are focused on not removing too much tissue, particularly of the lower eyelid, and risk developing postoperative lower eyelid sag. (ectropion)

Case Study: This 62 year-old female wanted to improve her tired look that she had had much of her life. Even as a much younger woman she had always had lower eyelid ‘bags’. As she had gotten older the bags became bigger and the loose skin around the eyes became greater. She had put off blepharoplasty surgery until now because of a lifelong fear of anesthesia and not wanting to look like she had had ‘plastic surgery’. 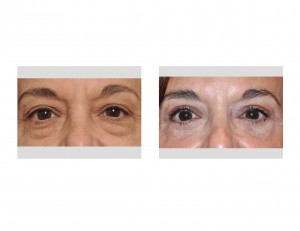 Under general anesthesia, she underwent upper and lower blepharoplasties. A fair amount of skin was removed from the upper eyelids with a small strip of orbicularis muscle. More skin was removed from the outer aspect than from the central and inner aspect of the eyelid. The lower eyelids were treated by aggressive removal of the medial, central and lateral fat pockets which had significant protrusion. Only a few millimeters of lower eyelid skin was removed with suspension of the orbicularis muscle at the lateral canthal area. All dissolveable sutures were used with the exception of the lateral canthal extensions of the upper and lower eyelid incisions. 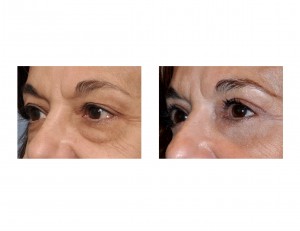 Like every blepharoplasty patient, she developed a significant amount of swelling and some bruising of the lower eyelids. It took about two weeks before she looked non-surgical and a full three weeks until she looked perfectly normal. The redness of the eyelid incisions took six weeks to become unnoticeable. It was a full two months until her eyelids looked really naturally relaxed, an observation that probably only a plastic surgeon would observe. 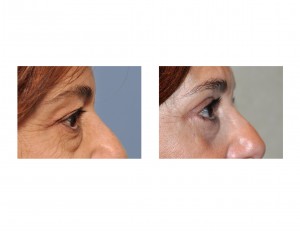 1) Aging of the face always affects the eyes initially and becomes progressively worse with time. Puffy eyes are the result of excessive and protruding fat of the eyelids, particularly that of the lower eyelid.

2) The puffy lower eyelid becomes very significant when the patient naturally as a congenital herniation of lower eyelid fat since they were young.

3) Successful correction of the puffy eyes requires substantial lower eyelid fat removal and skin from both the upper and lower eyelids.