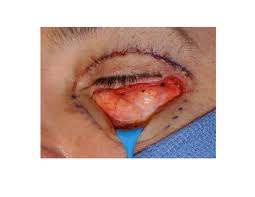 Undereye bags are a well recognized facial entity. Everybody has seen lots of people who have them and eventually many people will see them on themselves as they age. For some few people they will have them even when they are quite young before they have any significant aging. Lower eyelid bags in the aging face are made up of several tissue components including loose skin and muscle as well as protruding fat. In the younger patient who just has bags or puffy lower eyelids the issue is one just of protruding fat. But in either the young or old, where does the fat in lower eyelid bags come from and why is it there? This is known as herniated lower eyelid fat that wss originally under the eyeball. Fat under the eye acts as a cushion, which is why you can push back on your eye and it gives in a little. The fat around and under the eye cushions it from impact. This fat is normally contained to the under the eyeball due to a ligament in the lower eyelid known as the septum. But as we age this ligament weakens, allowing the fat to come spilling out creating the puffiness or bags.  In the younger patient with bags, this ligament is naturally or congenitally weak allowing the fat to prematurely bulge out. In essence bulging lower eyelid fat is the result of a weakness or hernia in the lower eyelid ligaments. This heriated lower eyelid fat has three distinct pockets of fat known as temporal,central and medial or nasal fat pockets. Interestingly, while fat is well known to have a yellow color the nasal fat pocket is white and no one knows why.  Herniated lower eyelid fat can be removed exclusively in a transconjunctival lower blepharoplasty or as part of a more complete open lower blepharoplasty.