Case Study: Cranioplasty for the Flat Back of the Head

Background:  The shape of the head is largely determined by the skull that lies underneath it.  Its normal oblong shape is created by the multiples plates of skull bone formed in utero that only formally fuse together after birth. The rapidly developing and expanding brain has great influence on forming the skull shape, much like an internal tissue expander.

But if the bone is blocked from being expanded, it will result in the push of the brain being directed elsewhere. This blocking effect can be created by a suture fusion (craniosynostosis) or an external force. By far, the most common cause of skull asymmetry is external molding. The most frequent form of external molding is inadvertent pressure caused by laying on one side of the head too long as a baby. This causes a classic flattening on one side of the back of the head with compensatory overgrowth on the other side. This is known as occipital deformational plagiocephaly.  On careful examination, one can often see from above that the entire head is twisted or rotated causing a cranioscoliosis effect in more severe cases.

With today’s shorter hairstyles and shaved heads, bothersome flat spots on the back of heads are becoming more evident. Often the ear on the flat side is moved further forward than the opposite ear and even the neck muscles on the flat side are asymmetric to the other side. These posterior skull asymmetries have given rise to patient’s requesting if they can be improved by some form of plastic surgery.

Case Study: This 42 year-old man was extremely bothered by the flat spot on the left side of back of his head. He had shaved his head for years since he began balding. To hide his concern about his flat spot, he always wore a hat to camouflage it. In discussing the option of a craniplasty correction, the issue of the trade-off of a fine scar was discussed. His level of concern about the back of his head made the scar issue a palatable exchange. 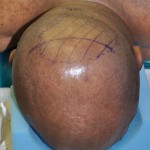 Under general anesthesia, a 9 cm horizontal posterior scalp incision was made. Wide exposure was made of both the normal and flat side of the occiput. Two small 1.5mm screws were placed at two different levels of the flat side marking how high the augmentation had to be for symmetry. Then using a PMMA acrylic cranioplasty material of 30 grams impregnated with antibiotic powder, a putty was made and inserted through the incision onto the flat occiput. The material was shaped through a combined internal and external methods until the area was both augmented and smooth and all edges were feather-like. The material set in ten minutes and the incision was then closed. A circumferential head dressing was applied and no drain was used. The length of the surgery was 90 minutes. 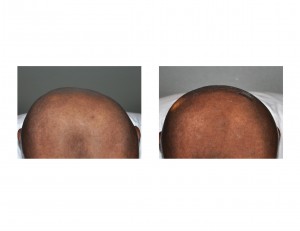 He had only minor discomfort the first night surgery and none thereafter. His head dressing was removed the next day. He had some expected swelling but no pain. Dissolveable sutures were used so removal was not necessary. He was placed on no restrictions after surgery and he could shave his scalp around his incision site 48 hours after surgery. His degree of occipital symmetry was dramatically improved. 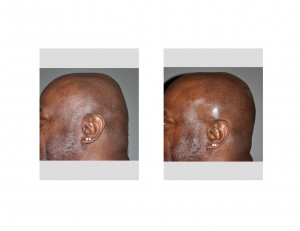 Correcting a flat spot on the back of head is no different than a frontal or forehead augmentation. It is an onlay cranioplasty that requires a biocompatible material and an incision to place it. Scars are made as small as possible and material options are either an acrylic PMMA or HA. (hydroxyapatite) Cost plays a role in material choice. How much skull symmetry can be achieved is largely based on the volume added. The limiting factor in how much volume can be placed is scalp tightness and getting a good incision closure, preferably not directly over the implanted material.

1)      One of the most common skull deformities is flattening on the back of the head, also known as occipital deformational plagiocephaly.

2)      Building up the flat back of the head is done by an onlay cranioplasty procedure, using a variety of different materials.

3)      Using an open approach, an occipital cranioplasty procedure is both very effective and involves minimal recovery.