Background: Chin implants come in a wide variety of styles and sizes. They have the greatest number of standard options available amongst all facial implants. This is because they have been clinically used for decades, longer than any other facial implant, and they are the most commonly performed facial implant augmentation.

But despite these options, standard chin implants do not work for everyone.  Certain aesthetic dimensional needs of the chin remain largely unserved by standard chin implants. This is most relevant for the vertical dimension. For those patients seeking vertical chin lengthening it almost always not a true vertical drop. It is more of a 45 degree downward angulation, a combination of both a vertical and horizontal increase. This type of chin implant is unique because it sits on the edge of the bone rather than completely on it.

While one style of a vertical lengthening chin implant does exist, it has a rounded or anatomic shape. For the male seeking a more square vertical lengthening chin implant a custom implant approach is needed. Such an approach allows for the degree of squareness to match that of the patient’s mouth width as well as allow long posterior extensions to augment the jawline in a tapering fashion backward. 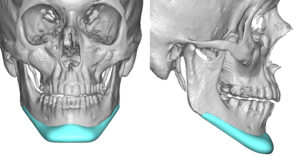 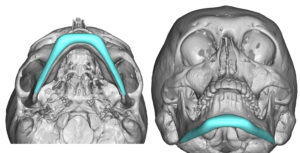 Case Study: This male wanted to increase the vertical dimension of his lower face. He also wanted a more square chin as opposed to his current rounded one. With a 45 degree projection downward from the chin (7mms), it was necessary to extend the posterior wings of the implant back along the sides of the jawline for a natural flow of the implant into the bone. This also added some width to the center of the jawline which is important to prevent the chin from looking too square.

Under general anesthesia a small submental incision was made through which a subperiosteal pocket was made from the chin back to the attachment of the master muscle. Despite the long span of the implant, its flexibility allows it to be inserted through a smaller submental skin incision that most would believe possible.

1) Custom chin implants can be designed with long jawline extensions back to the anterior attachment of the masseter muscle.

2)  Most chin implants that require vertical lengthening ned to be custom designed so they flow smoothly back into the jawline behind it.

3)  The degree of squareness in a custom designed chin implant for a male can be designed based on the patient’s mouth width.