Background: The top of the skull has the best aesthetic shape when it is a smooth convex curve from one temporal line to the other. This shape can be altered and is influenced by the original sagittal suture line which runs down the middle of the skull between the two original anterior and posterior fontanelles. While it should be smooth and unraised sagittal crest deformities can occur which can be argued are very minor variants of the well known sagittal craniosynostosis condition.

A sagittal crest can develop which appears as a prominent bony ridge down the middle. This can make the bony area between the temporal lines at the side and the midline of the skull (parasagittal area) appear depressed or too shallow. It is also possible that the height of the midline of the skull is normal but that the bony problem is that the parasagittal region is underdeveloped. Either way the top of the head does not have a convex shape and appears irregular in contour.

To create a more convex shape to the top of the head, it is necessary to determine whether sagittal crest reduction needs to be done or parasagittal augmentation is more appropriate.  Computer imaging from the frontal view is very helpful in this regard although there are limitations to it based on the length and density of one’s hair. 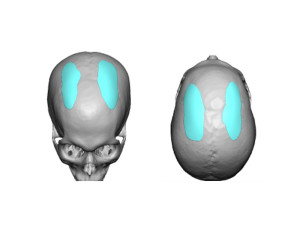 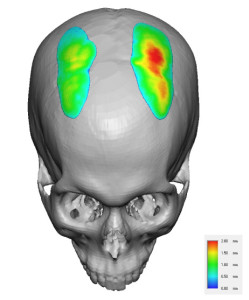 Using a 3D CT scan custom parasagittal skull implants were designed to fill in the grooves. They were long and slender and spanned the traverse from the midline to the temporal region on both sides. With the aid of computer design the parasagittal depressions were filled up just to the level of making the temporal lines curve upward to the midline and nothing more. 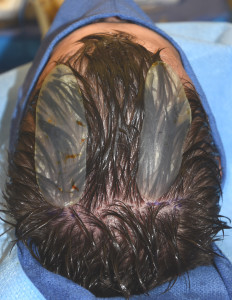 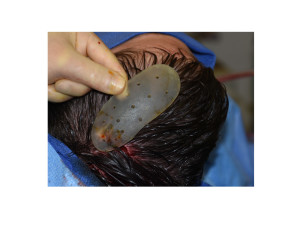 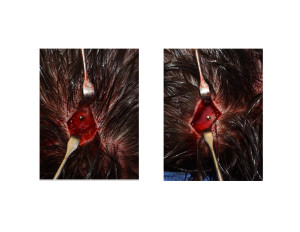 Under general anesthesia two small (3 cm) incisions were made at the posterior end of the parasagittal region near the back of the head. Subperiosteal tunnels were made and the implants inserted. Once positioned they were secured with a single 1.5mm self-tapping titanium screw.

Parasagittal grooves or depressions can be augmented to help create a more convex head shape across the top. Given their small size in many cases and the need for perfectly smooth edges that lay flush to the surrounding skull bone, a custom computer-designed implant approach is needed. This also allows the skull implants to be inserted through the smallest possible scalp incisions with assurance that they will create the best possible contour result.

1) Parasagittal skull deficiencies can occur due to either a high sagittal crest, low parasagittal areas or both.

2) Correction of low parasagittal areas of the skull is done by augmnetation to bring them closer to the level of the sagittal crest.