One side being flatter than the other creating asymmetry in occipital projection is the most common aesthetic skull deformity that I see. Men seek treatment for it more commonly than women for the obvious reason that they have. Shorter hairstyles which exposes the back of their head more than women. Women may be aware of their occipital asymmetry but they seek treatment less because of better hair coverage.

The best method for occipital sugmentation, particularly when asymmetry exists, is a custom occipital skull implant. In the 3D planning and implant design process it identifies the differences between the two sides of the back of the head and allows for a precise matching of the two sides in the implant design.The determination needs to made as to whether the more projected side needs to be further augmented or not. 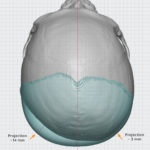 Case Study: This young male had flatness and significant asymmetry on the back of his head of which he had been aware from a young age. A 3D CT scan shows that the occipital asymmetry was one 1 cm with some lack of projection even on the more projected side. A custom occipital skull implant was made to augment the flatter side by 14mms and the opposite side by 3mms.

Under general anesthesias and in the prone position, a 9 cm long scalp incision was made in a horizontal orientation over the nuchal ridge. A subperiosteal pocket was made beyond here the implant would lie in top of the head and onto the temporal regions. The implant was folded and inserted , positioned as designed and secured with two microscrews along its bottom edge.

The size of any skull implant can not be limitless. Its design must take into consideration how much the scalp can stretch on an immediate basis. This is usually in the range of 10 to 15mms at the maximal point of projection. If more than this projection is needed a first stage scalp expansion will be needed.

1) Asymmetry of the back of the head is a very common aesthetic skull deformity.

3) A custom occipital skull implant is the most effective method for correcting back of the head asymmetries with the smallest scalp incision in doing so.