Background: Plagiocephaly is a well known congenital condition that results in a variety of craniofacial skeletal malformations. One of the most consistent findings is that of flatness of the back of the head. This flatness occurs as a result of the overall twisting rotation of the skull around its vertical axis. The flatness on one side of the back of the head is often accompanied by some protrusion on the opposite side of the occiput. This protrusion may only appear so because of the contralateral flatness or may be actually beyond what the normal shape would be.

Beyond infancy there is no non-surgical treatment for occipital plagiocephaly. As an adult surgical contouring through bone removal and reshaping is also not a viable option. For a largely cosmetic deformity the magnitude of the surgery does not justify the associated risks and inevitable contour deformities that would result. This leaves the only treatment for asymmetries of the back of the head as an onlay approach.

Building out the back of the head by expanding the bone contour can be done using a variety of bone cements or silicone implants. The concept of custom skull implants has proven to be the superior technique as it allows the exact implant design to be determined before surgery. In addition it allows the surgery to be done through the smallest scalp incision. 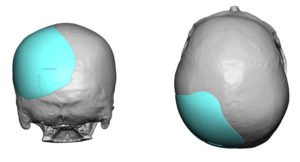 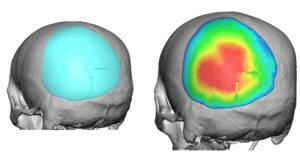 Under general anesthesia and in the prone position, his entire occipital scalp scar from his prior hair transplants was excised. This was good opportunity to have an uncommon amount of surgical access to place the implant. It also was an opportunity to do a simultaneous scalp scar revision at the same time. The skull implant had multiple perfusion holes placed through it prior to implantation. The arrow markers placed into the implant surface allowed for its proper orientation.

His immediate surgical result show adequate augmentation of the flatter side of the back of his head that was symmetric with the opposite rounder side. The use of his hair transplant scar made for convenient access for implant placement. But anytime there is a linear scar across the back of the head this also means that there is a tissue deficiency which may impact whether a scalp implant can be safely placed. In this case the thickness of the skull implant was modest at only 8mms. But fat grafting was still initially done just to be certain that some stretch of the scalp could occur.

1) The most common presentation of plagiocephaly is flatness on one side of the back of  the head.

2) The best correction for occipital plagiocephaly in adults is a custom occipital inplant made from a 3D CT scan.

3) A custom occipital implant is placed through a low occipital hairline incision from the prone position during surgery.