Background: Aesthetic skull augmentations are sought by individuals who have a deficient or flatter area of the skull. One of the most common areas to augment is a flat back of the head or crown area. This is the one aesthetic skull deficiency that is equally shared by both men and women. While women have an advantage with their hair for camouflage this is often not a desired long-term solution.

Augmentations of the skull can be done by a variety of materials, all of which has long histories of clinical use. The original skull augmentation material was PMMA, a plastic cranioplasty putty that dates back fifty years. Several decades ago hydroxyapatite cements (HA) were introduced and they offered an osteoconductive surface. While still a ceramic material, it offers more appealing biologic properties (although far less appealing working properties) than PMMA.

The problem with both PMMA and HAC materials is that they require a wide open surgical field to be properly placed and shaped. Even if such scars were aesthetically acceptable the amount of augmentation obtained is limited due to either material cost (HA) or the shaping/contour issues. (PMMA)

For a more stable method of volume addition, implants have a valuable role. But a standard cheek implant, which primarily augments the bone, is not where the fat has been lost. Rather it is under the cheekbone where the volume addition is needed and is why submalar cheek implants are used. As seen in this skeletal model, such implants are designed to sit on the underside of the cheekbone so the influence of the material can extend partially into the buccal space.

Case Study:  This young female had a prior crown of the skull augmentation using hydroxyapatite cement through a complete coronal scalp incision. Once the swelling went down the anesthetic outcome was minimal. A 3D CT scan showed the small amount of cranioplasty material applied for such a big scalp incision. 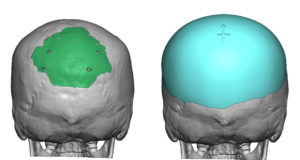 Under general anesthesia her wide scalp scar was revised and the scalp flap reflected to reveal the HA cement. The nine screws and HA cement were removed and replaced by the new custom skull implant.

Despite the biologic appeal of HA cement for aesthetic skull augmentations, it has limited effectiveness due to high cost and the open access required to place it. A premade silicone implant offers an assured shape and volume that can be placed through much smaller scalp incisions.

1) Significant skull augmentations can not usually be obtained with hydroxyapatite cements despite their biologic appeal.

2) A custom skull implant provides a volumetric increase of 5X to 10X more than that of hydroxyapatite cement.

3) A custom design approach allows a much improved and larger design to be made around an existing hydroxyapatite skull augmentation.