Background: Custom skull implants provide the most effective method for any form of skull augmentation. By creating a preformed implant with the shape and thicknesses one thinks can most effectively greater the desired augmentation effect, a smaller scalp incision is needed than if the augmentation had to be created by the traditional application of bone cements. A performed implant also has an assured smoothness of its outer surface and a minimal edge transition effect.

Give that one of the most important goals of a skull implant is to increase the size of the head, an important consideration in the implant’s design is its size or thickness. There is no way to predict with complete accuracy as to how big of an implant is needed to satisfy the patient’s aesthetic desires. In addition there are limits as to how much the scalp can stretch to accommodate any underlying implant size. In the desire for large skull augmentations, an immediate  two stage skull augmentation approach is used with a first stage expander to ensure there is adequate scalp for uncomplicated coverage.

Beyond implant size, the exact area of skull augmentation ultimately desired by the patient can change after they have had an implant placed. They may decide that the original area needs to be expanded or changed in its shape once they really see what the final effects of the augmentation is. This is often requires a new implant that has a different shape and/or increased size. 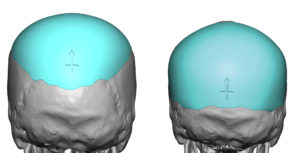 Case Study: This young male has a prior occipital skull implant placed based one his desired area of augmentation. While uncomplicated in its outcome he ultimately decided that the area of augmentation should be lower to provide more posterior occipital projeetion. A new implant was designed to changes the location of skull surface area coverage as well as the amount of projection from the bone. 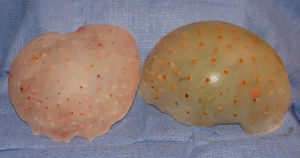 Under general anesthesia his original scalp incision could be seen to have healed beautifully with minimal scarring. After opening the incision the extensive amount of tissue ingrowth could be seen into the perfusion holes. The release of these tissue ingrowth was necessary to remove the original skull implant. The capsule was released inferiorly and laterally to accommodate the new custom skull implant.

Like any form of body augmentation the aesthetic outcomes can not always be exactly predicted nor can the patient know how they will feel in advance about the dimensional changes. Often times the patient does truly have to ‘wear it for awhile’ to really know how they feel about the aesthetic changes. As a result, implants not infrequently need to be changed or modified at the patient’s request. A custom skull implant is no exception. The tissue expansion caused by the original skull implant allows for bigger or more expanded designs to be secondarily placed.

1) Custom skull implants can be successfully replaced with new and larger ones.

3) The larger second skull implant does not require an elongation of the original scalp incision.