« The Aesthetic Role of the Antihelix in Otoplasty
Dr. Barry Eppley Named as Top Doc in Real Self 100 »

Background: Jaw or jawline reduction surgery is directed towards narrowing the lower third of the face. Very square or wide lower faces is either considered too masculine or aesthetically undesired in women in particular and in some men. While widely considered an Asian (particularly Korean) type surgery, it is becoming more commonly requested amongst Caucasians as well to help slenderize their face.

There are non-surgical and surgical methods for jaw reduction (so called V-line jaw surgery) based on the anatomy of the mandible and its soft tissue attachments. A wide lower face can be caused by masseter muscle enlargement due to congenital development or bruxism and is treated non-surgically by Botox injections. Masseter muscle reduction is often a necessary part of jawline narrowing but mandibular bone changes are usually the cornerstone of V-line jaw narrowing.

In narrowing the jawline it is necessary to create the visual effect of a less wide mandible from angle to chin. While it is commonly perceived that the bone is cut from the sides of the jawline from back to front, this is not how it is actually done. The location of the inferior alveolar nerve in the mandible as it courses through the bone and its exit from the mental foramen anteriorly make such a bone reduction approach surgically very difficult with a high risk of nerve injury. Thus most commonly chin and jaw angle bony procedures are done to create the v-line jaw narrowing effect, 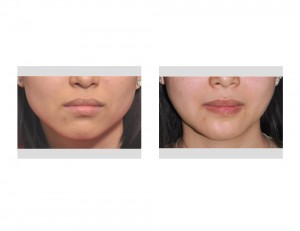 Under general anesthesia, she initially underwent bilateral jaw angle reduction by outer cortical osteotomies combined with electrocautery of the inner surface of the masseter muscle. A horizontal chin osteotomy was then done with a 5mm midline ostectomy with a horizontal advancement of 7mms. 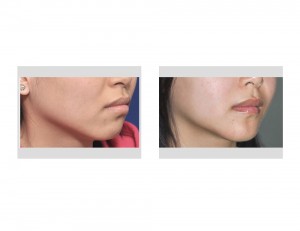 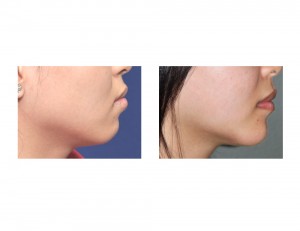 Three months after her V-line jaw narrowing, she showed a more narrow jawline in the front view and a longer jawline in the side view. Additional Botox injections will be done in the masseter muscle for further thinning in the jaw angle area.

In most V-line jaw narrowing surgeries, the body of the mandible does not need to be reduced to create the effect. Chin and jaw angle changes are enough in most cases to create an adequate jawline narrowing result.

1) Jawline reshaping typically strives to make the jawline more narrow and longer in the front view.