Case Study: Flat Back of the Head Correction by Augmentation Cranioplasty

Background: The shape of the skull is affected by numerous factors including genetics, in utero skull pressures, post delivery head positioning and growth of the brain. In general, the skull has an oblong shape that is slightly wider in the back than the front. While there is no uniform aesthetic standard for a pleasing skull shape, there are certain skull shape abnormalities which are acknowledged to be undesireable.

One of these undesireable skull shapes is the ‘flat back of the head’. It can be seen as either flatness on just one side (plagiocephaly) or that the entire back of the head is flattened. (brachycephaly) Even in patients that have full heads of hair, these occipital deformations can be disconcerting. Patients frequently use various hair style manuevers to create the illusion of an expanded skull contour. In those with poor hair density or who shave their heads, the magnitude of the occipital skull depression can be very visible.

Correction of the flat areas on the back of the head can be done by a procedure known as an onlay cranioplasty. In essence this is the application of a synthetic material on top of the flattened skull bone to change the shape of it. Synthetic cranioplasty materials, such as PMMA and hydroxyapatite bone cements, can be applied and shaped to create an expanded and more rounded form. The key to a successful aesthetic cranioplasty is the length and location of the incision, the volume of material that can be added (based on how much the scalp can stretch) and the formed shape of the augmentation.

Case Study: This 28 year-old Asian male desired the width of his temporal skull reduced and the flatter occipital dome built up. He had very large temporal muscles which created significant convexity in the area above the ear forward to the eye. He also had a flat spot directly on the crown of his head. (crown flatness) 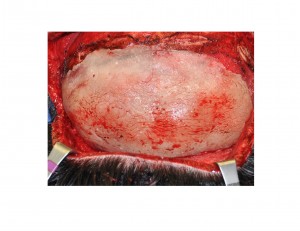 Under general anesthesia in the beach chair position (45 degree chair position), a transcoronal incision was made from just above one ear to the other. This enabled the scalp to be reflected in a ‘clamshell’ fashion. The temporal muscles were released along their posterior and superior attachments along the temporal line down along the side of the forehead. The temporal muscles were released, resected and reattached with miniature screw through the fascia in a much more anterior and inferior position. Posteriorly the flattened occipital crown had a 60 gram PMMA onlay augmentation done with microscrew anchorage. The scalp was then closed with resorbable sutures for the skin with larger resorbable sutures for the deeper galeal layer. 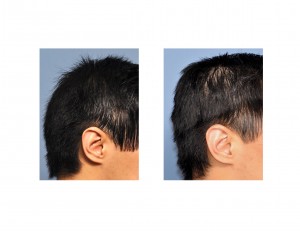 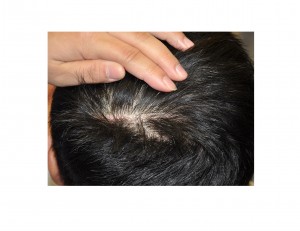 One important issue to assess in any aesthetic cranioplasty surgery is how did the scar heal. His scalp scar results showed a remarkably discrete scar that was hard to find…a result that I like to see in any scalp scar particularly in men where hair camouflage may be harder to come by.

1) Augmentation of the flat back of the head is one of the most common request for aesthetic cranioplasty. (cosmetic skull reshaping)

2) Occipital cranioplasty is done through the onlay application of either PMMA or HA on the outer skull surface.

3) One can expect to achieve up to 15mm to 20mms of augmentation in the central arc of the occipital expansion dependent upon how much the scalp will stretch to accommodate it.