Background: Sagging of the breasts is an almost expected sequelae for most women as they go through life. The effects of gravity and body changes of pregnancy and weight loss will make just about any breast mound drop. This is particularly so when one starts out with some significant breast volume making it very prone to sagging even early in life.

In correcting breast sagging, some type of breast lift is needed. There are several types of breast lifts that can be used which differ in the amount of scar created and how much the breast is lifted. The type of breast lift used can also be influenced by whether an implant is going to be simultaneously placed for volume improvement as less of a breast lift may be needed.

Breast lifts can be classified into four types, crescent nipple lifts (I), periareolar donut lift (II), vertical lollipop lift (III) and a full anchor lift. (IV) Like lifts, the amount of breast sagging is also classified into types (I – IV) based on where the position of the nipple sits relative to the inframammary fold. In theory, the type of breast lift matches the type (degree) of breast ptosis. (sagging)

Case Study: This 38 year-old female wanted to improve the shape of her sagging breasts. She had always had large breasts since she was a teenager but, after two pregnancies, they had fallen with the nipples well below the inframammary folds. She was not interested in a bigger breast size, just a better uplifted breast shape. 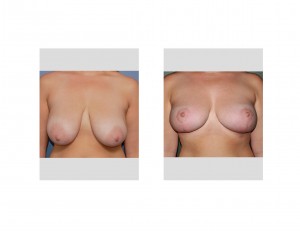 Prior to surgery, a full breast lift design was marked out on the breasts which would elevate the nipple from a 26 cm vertical position (from the sternal notch) to an 18 cm vertical position. Under general anesthesia, all skin within the preoperative marks  and around the areola was removed. (de-epithelized) Skin flaps were raised by going along the breast mound down to the chest in a near circumferential fashion around the breast mound. The breast mound was then elevated upwards and the skin flaps wrapped around and underneath it and closed. The new position of the nipple was marked out at 5 cms above the inframammary fold, the overlying skin removed, and the nipple-areolar complex delivered and closed. This created a full full upper pole of the reshaped breast and a lower pole that seemed short and blunt. 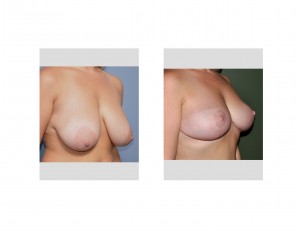 The breast mound settled into a more natural shape (less upper pole fullness and a rounder lower pole) by six weeks after surgery. Final healing of all incisions, including any extrusions of sutures and a well healed inverted T junction took a full seven weeks after surgery. 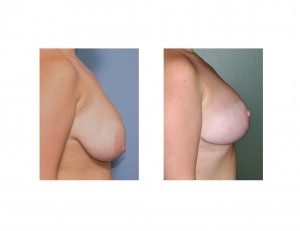 A full Type IV breast lift can significantly lift and reshape a sagging breast at the expense of the scars that it creates. When there is adequate breast volume, such a breast lift can create both an uplifted and fuller breast that has greater upper pole volume. It is necessary to ‘over correct’ the lift to factor in some expected breast mound settling.

1) Significant sagging of the breasts requires a full breast lift which can be done without the removal of any breast volume.

2) A full Type IV breast lift creates the classic anchor scar pattern which is necessary to get a maximal breast lift and reshaping result.

3) While a full breast lift creates considerable scar lengths, half of the scare remains hidden along the inframammary crease.