Background:  Augmentation of deficient calf muscles is done for a variety of reasons. These include naturally small calfs, in bodybuilders who want their calfs to match the muscular look of the rest of their body and for congenital leg defects in which calf muscle development is small and ill-defined either on one leg or both legs.

One of the most common congenital lower leg defects that affects the calf muscles is that of clubfoot. Clubfoot is a well known birth defect, also called talipes equinovarus, as it occurs in about one in every 1,000 births. In about half of those so affected, it will occur on both sides. It is a birth defect that is far more common in males than females. The appearance of the foot so affected is unmistakeable with the foot turned inward on its side. The involved foot, calf and overall leg length is smaller and shorter.  If clubfoot is limited to one side, the calf asymmetry compared to that of the normal side is very apparent. Circumferential calf measurements are often 2 to 5 cms smaller than that of the unaffected leg.

Calf augmentation is most commonly done by synthetic implants. Commercially available calf implants offer immediate and permanent changes in calf size and are made of a very soft durometer solid (spongy) silicone material.  They are shaped like long fat cigars in various lengths, widths and volumes. These implants are placed in a subfascial location on top of the calf muscles. Complications can include infection and inadequate positioning whose risks are very low. The biggest issue with calf implants is the recovery, particularly if both calfs are treated.

Case Study: This 16 year-old female was born with a right clubfoot deformity. Her leg leg and foot were unaffected. She had been treated by serial casting as an infant and had a fairly normal gait. She was bothered by the difference in her calf sizes which was very visible in shorts. The difference in circumferential calf size measurement was 3.7 cms at the mid-calf area. 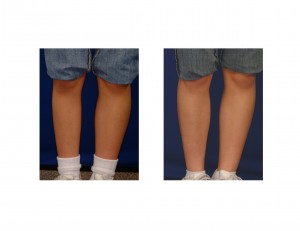 Under general anesthesia and in the prone position, a 3 cm incision above the medial gastocnemius muscle head was made in the popliteal skin crease of the right leg. Dissection was carried down to the gastrocnemius fascia which was horizontally incised. An instrument was used to develop the subfascial pocket over the muscle. A small silicone calf implant, measuring 16cms in length by 5.5cms in width (70cc volume) was inserted. The fascia and skin was closed with dissolveable sutures and taped. No other dressing was used. 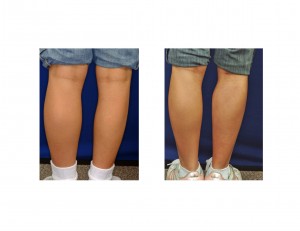 Her recovery included some calf pain, swelling and inability to comfortably fully flex the ankle for a few weeks. By six weeks after surgery she had returned to all normal activities. Her calf asymmetry was improved, although not perfect, with a change to only a 1.5 cm difference in circumferential mid-calf measurement from that of the left normal side.

Gastrocnemius muscle augmentation using implants can provide an effective improvement in calf asymmetry due to clubfoot. The congenital shortness of tissue around the calf makes for tight skin. This limits the size of the calf implant that can be placed and dual muscle augmentation (medial and lateral heads) is not usually advised.

3) Calf augmentation (reconstruction) in club foot with synthetic implants must take into consideration the tightness and shortage of circumferential skin when selecting implant size.