Background: Gynecomastia is a well known male chest abnormality that has a wide range of expression from puffy nipples to that of an actual breast mound.  It is treated by two basic approaches, liposuction and open excision. Which treatment method is sued depends on the size and tissue quality of the gynecomastia problem. Most commonly a combination of open excision through a lower areolar incision and more encompassing liposuction of the entire chest is done to get the optimal result.

The results of gynecomastia surgery is reflective of how much fat is removed and the evenness of its removal, regardless of the treatment method used. Both excision and liposuction are as much art as science as there is no way to know for sure as to how the tissue removal will ultimately look. While the plastic surgeon wants to get the most complete gynecomastia reduction, there is also the fear that too much tissue removed will cause the opposite problem. This would appear as an inward retraction of the nipple areolar complex known as the ‘gynecomastia crater deformity.’

While many early gynecomastia results may show a slight inward contour, these usually resolve on their own to a smoother appearance. But when excessive breast tissue is removed the inward retraction of the nipple-areolar complex becomes more obvious and pronounced as postoperative healing occurs. It is most manifest when one’s arms are raised as the adhesion between the underside the nipple-areolar complex and the pectoralis fascia causes a maximal retraction effect. 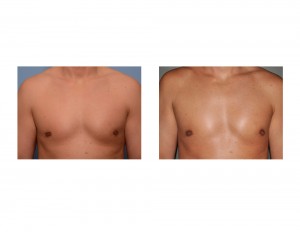 Under local anesthesia, fat was harvested from the lower abdominal area with small cannulas. It was concentrated by filtering and double washing into 40ccs. A small cannula was initially used to break up the scar and adhesions under the nipples and then fat was injected both under and around the nipple areolar complexes. 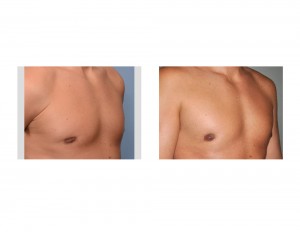 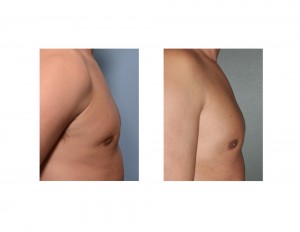 At three months after surgery his postoperative results showed improvement in the nipple areolar-chest contour and less nipple retraction. Fat take at this point would be assumed to be maximal. A second stage fat grafting is planned for further improvement.

When there is not an adequate buffer of tissue between the nipple and the pectoralis muscle, adhesion and scar contraction will occur. Correction of the gynecomastia crater deformity almost always requires release of the scar bands (adhesiolysis) and restoration of intervening tissue between the nipple and chest muscle. Injection fat grafting provides the easiest way to achieve both objectives. It could also be done through an open method using the lower areolar incision and placement of a dermal-fat graft. This approach poses more of a donor site harvest concern.

2) Gynecomastia defects can be successfully treated by injectable fat grafting which may require more than one session for optimal improvement of chest contour.

3) Injection fat grafting can be combined with PRP and Acell particles to optimize fat graft take.