Background: Aesthetic skull augmentation can be done for a wide variety of deficient skull shape concerns. Changes can be made in skull height, skull width and frontal and posterior skull projection. In rare cases and with the use of a first stage scalp tissue expander, the entire skull can be augmented through a circumferential effect. Such head size increases are largely achieved through a bone augmentative effect.

While a variety of skull augmentation materials have been used over the years to help achieve these changes, the recent use of 3D CT scanning and silicone implant design has made the procedure more reliable and effective. When designing such a skull implant to widen the upper half of the skull, the location and thickness of the temporal muscle must be taken into consideration. To do on a 3D CT scan the temporalis muscle must be painted’ onto simulate where it is since this is a bone scan. 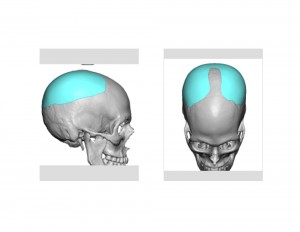 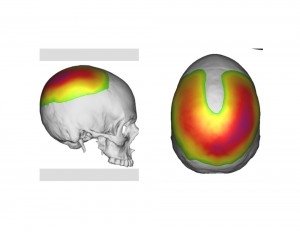 Case Study: This 32 year-old male felt that the sides of his head was too narrow. In determining what he meant by sides of the head, he indicated that it was the top of the head and down to the sides. He also wanted some crown augmentation as well around the upper occipital region. Using his 3D CT scan, a custom implant was designed to cover these areas with a maximal thickness of 6mms at its largest.

Under general anesthesia, the custom skull implant was placed through an 8 cm scalp incision. Because the implant was reasonably thin it could be folded and inserted through a length of an incision that was smaller than the width of the implant.

His postoperative results showed the desired change immediately on the operative table as would be expected. Recovery is very minimal with this type of smaller skull implant. While there is some swelling it is ‘hidden’ in the hair and not visible to others. The skull change with this type of implant is modest but appreciable. This fitted in with the patient’s aesthetic head shape desires and amount of commitment needed to do so.

The use of custom designed skull implants today allows for making even subtle head shape changes is a predictable, safe and minimal risk method.

1) A head widening effect can be most reliably achieved with a custom made skull implant.

2) The desired dimensions of a head widening skull implant are made from a 3D CT scan of the patient.

3) If the skull implant is not too thick, it can be inserted through a relatively small scalp incision.