Background: The chin is composed of various tissues that simplistically is a ball of soft tissue sitting on top of a prominent bony ledge. At the top of this ball is a horizontal groove or indentation that sits between the lower lip and chin about 2/3s the way up from the very bottom of the chin bone. Known as the labiomental fold, sulcus or groove, it is a natural feature of most chins. It is caused by the underlying attachments of the mentalis muscle as it comes superiorly and inserts into the underside of the skin below the lower lip. It forms an angle between the lower lip and a line tangent to the superior convexity of the chin and is purported to be most aesthetic at around +/- 130 degrees. 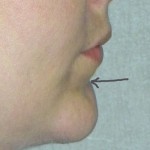 The labiomental fold is not a very common aesthetic facial concern. But occasionally requests are made to treat a deep one. The most common treatment method is by injection and it can be augmented like any other facial fold. It requires smaller volumes of injectable fillers than other facial sites and any of the commercially available fillers can be used. Synthetic fillers can last up to a year in the fold. Fat injections can also be used but there is no documentation that it persists any longer. 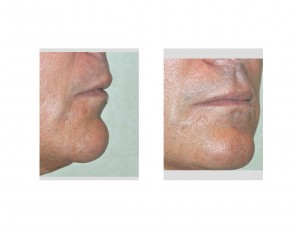 Case Study: This 48 year-old male was going to undergo multiple aesthetic procedures including rhinoplasty, submentoplasty and lip and nasolabial augmentation with implants. He also wanted an implant to lessen his labiomental fold as well. He has always felt it was too deep. 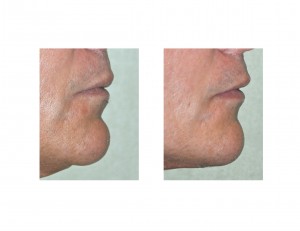 Under general anesthesia, he had all of his implants placed first to decrease infection risk. Using Permalip silicone implants a 4mm x 65mm implant was placed in the upper lip and a 3mm x 60mm implant in the lower lip. For the labiomental fold, small stab incisions were made at each end. A 5mm diameter Permalip implant was slide into place right under the skin and the ends trimmed off as only about 35mm of length was needed. 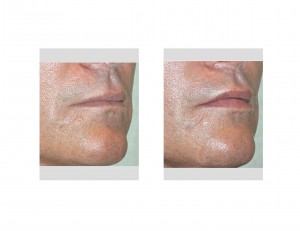 There was no bruising in the chin from the labiomental fold implant placement and the incisions healed inconspicuously. There was a moderate reduction in the depth of the fold that was maintained.

Labiomental fold reduction can be achieved permanently with the placement of a subcutaneous implant. Most reductions are modest in nature and deeper V-shaped folds respond less significantly than those that are more shallow with a rounder indentation.

1)      The labiomental fold is natural line between the lip and chin whose depth is genetically determined.

2)      Injection therapies provide an immediate but temporary improvement in lessening the depth of the fold. Synthetic implants provide a permanent result.