Background: Buttock sagging, more formally known as buttock ptosis, occurs for a variety of reasons. Large amounts of weight loss is one well known cause of the lower buttocks to bottom out with volume deflation and the creation of a relative skin excess.  Aging is another common cause and is particularly prone to occur in thin women who naturally have small buttock volumes. This is the result of the weakening of the infragluteal fold attachments creating a downward drift of the lower buttocks.

Of all the buttock contouring procedures, a lower buttock lift for buttock ptosis is the least frequently done. While not commonly performed it is actually the oldest buttock reshaping procedure, predating buttock implants and fat grafting to the buttocks. Because it leaves a scar to create its effects this is a concern to both patient and surgeon alike leading to its low incidence of use.

In the treatment of buttock ptosis, numerous treatments have been unsuccessfully tried. Liposuction is the most frequently attempted but it often only aggravates the problem since the lower buttock skin is not going to shrink down with volume removal. It usually creates an additional tissue roll or contributes more to the sagging one that already exists. Suture suspensions and even fat injections have been tried but neither one can remove the tissues excess or re-establish a stable infragluteal fold.

Case Study: This middle-aged thin female was bothered by the significant sagging of her buttocks that occurred as she aged. She had not lost weight and this had gradually occurred over time. Her buttocks lacked projection and were elongated as the infragluteal fold had dropped. Preoperative markings were made in the standing position with the new position of the infragluteal fold marked up under the tissue sag and the overlying amount of skin and fat to be removed. One important marking is the lateral limit of the excision so the scar line does not become visible beyond the nature lower buttock crease.

Under general anesthesia and in the prone position. The skin between the markings and a wedge of fat down to the gluteal fascia in the center was removed. The infragluteal crease was first estabished by dermal-fascial-dermal sutures of O-Vicryl., eight per side. Dermal sutures were placed between them with 2-0 Vicryl. The skin was closed with subcuticular  2-0 Stratafix. Interrupted simple 3-0 prolene sutures were placed over the closure for additional support. The closure line was covered with multiple layers of glued on tapes. 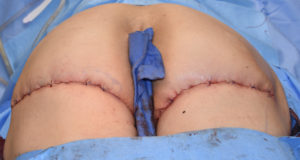 The lower buttock lift is effective because it removes the ptotic tissues and re-establishes a higher infragluteal crease. Like re-creating the inframammary crease in breast surgery, the buttock ‘mound’ needs a defined line of lower support as well. It is possible that mesh supports could be used to add support like a sling across the lower end of the buttocks,  but the use of multiple dermis-fascia-dermis sutures works well in most patients.

2) A lower buttock lift removes the over hanging tissues and recreates the infragluteal fold at a higher level.

3) The technique for creating the infragluteal fold is dermis-fascia-dermis suturing.