Background: A muscular appearing upper body has long been a desired physical appearance for men. This is evidenced by the large number of physical fitness and training centers that exist as well as gym and workout equipment sold every year. With the proper amount of time and sustained effort, most muscles can be enlarged. Such continued efforts will be needed to maintain them

Bu despite a natural way to achieve muscle enlargement, not all men want to put forth the effort or, even if achievable, want to continue the physical effort to maintain it. There are also men who, despite reasonable effort, can not build their muscles satisfactorily. There are genetic differences in muscle and some men are far more capable of achieving muscle hypertrophy than others.

Body muscle implants have been around for decades of which the most commonly used are pectoral and calf implants. (technically buttock implants are muscle implants if they are placed intramuscular but the buttock augmentation would not be considered a muscle enhancing procedure) Implants have also been used to enhance the bicep and tricep muscles although there are no such standard preformed implants for these muscle regions.

Case Study: This middle-aged males wanted to enhance the major muscles of his upper body. He already was at a good weight and worked out regularly with well defined upper body muscle bellies. 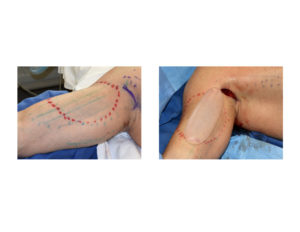 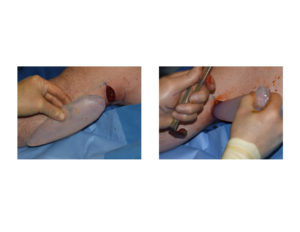 His total upper body muscle augmentation surgery took his already well defined appearance and enhanced each major muscle group. He maintains this enhanced muscular  look now with less working out then he did previously.

Most muscle implants sit under the fascia and on top of the muscle belly. This location allows for normal muscle function and range of motion. The one exception is the pectoral implant which is positioned under the pectorals major muscle where the muscle glides over the top of the implant.

1) A muscular male upper body has long been considered a desirous physical appearance.

2) The dominant muscle bodies of the upper body are the pectoralis, biceps, triceps and trapezius.

3) Pectoral, bicep, tricep and trapezius muscle implants can be simultaneously placed during the same operation.