Background: The lateral vermilion-cutaneous borders of the lips provide a boundary line for the outer aspects of the mouth. The converged lip corners define both the width of the mouth as well as have an impact on facial expression. While dynamic facial movement will always create a smile, a static facial expression can either have a neutral appearance or can create a frowning appearance. If the mouth corners turn down, due to age or natural development, one can have an angry to unhappy facial appearance even if one does not feel internally that way.

Correction of downturned mouth corners can be done by injections using Botox and synthetic fillers. But those effects are temporary and often less than optimal. A surgical corner of the mouth lift, however  provides a permanent change by physically changing the position of the vermilion cutaneous junction at the side of the mouth.

While many corner of the mouth lifts are done in women, there are men who undergo the procedure. While scar concerns are not gender specific, some fear greater scars around the mouth in men. However that concern is unjustified as the hair-bearing beard skin around the lips in men is actually more favorable for improved or less scar formation than in women. Also using the pennant corner of mouth lift technique also ensures that the scar line stays right at vermilion-cutaneous border.

Case Study: This male presented with long-standing concerns about his downturned mouth corners. He felt that it made him look angry when he was not and adverse affected his perception and interaction with others. 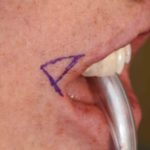 Under local anesthesia a pennant-type of corner of mouth lift was performed. This is essentially a vermilion transposition flap that is moved into a triangular excision of skin above the mouth corner. It also involves orbicularis muscle release and inferior to superior muscle flap relocation to support the elevated vermilion.

His three month results a subtle but visible change to his mouth corners that has eliminated any frowning appearance. The vermilion-cutaneous scars are imperceptible.

1) Drooping of the corners of the mouth is best treated by a direct corner of mouth lift procedure.

2) Direct corner of the mouth lifts can either make the smile line horizontal or can even turn the corners up slightly.

3) In the male the scars from the corner of the mouth turn out very well due to the hair-bearing beard skin adjacent to the lip vermilion.