Aging presumably affects every structure of the body to some degree which generally involves some loss of structure. This has become elucidated in the face over the pas decade where bone loss occurs throughout the facial skeleton and contributes to the overlying soft tissue laxity that develops. 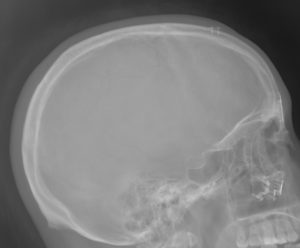 In the September 2018 issue of the Aesthetic Surgery Journal an article was published entitled ‘Calvarial Volume Loss and Facial Aging: A Computed Tomographic (CT)-Based Study’. In this study the authors looked at changes in the skull with aging. Over one hundred and fifty (150) Caucasian patients of each decade (10 male and 10 female patients per decade) 20-29 years, 30-39 years, 40-49 years, 50-59 years, 60-69 years, 70-79 years, 80-89 years, and 8 males and 9 females aged 90-98 years) were evaluated with computed tomographic (CT) scans with standardized measurements of cranial thickness were performed for the frontal bone, nasion, vertex, pterion, lambda, calvarial and midfacial height, and sagittal and transverse diameter.

The authors conclude that the widening of the skull may have a role to play in the skeletonized appearance that develop in many people as they age. The loss of skull volume can be a source of lessening support for the soft tissues in the face which ultimately contributes to its inferior descent. This would be Jost evident in the brows and periorbital areas as well as across the temples.

While the skull may lose bone with aging, what would be aesthetic procedures that may be beneficial. Temporal implants come to mind since they help restore volume/shape to temporal hollowing. You could also make an argument for skull augmentation which would create an overall lifting effect of the facial soft tissues which I have seen many times in my younger patients who get overall skull augmentation.