Background: Lip augmentation is a popular procedure that is most commonly done with the use of injectable fillers. Any of the family of hyaluronic-acid based fillers offers an immediate improvement in which the material can be placed in a variety of lip locations to create both increased size and/or enhancement of various lip features. Its only downside is that it is temporary and must be repeated for the effects to be maintained.

The overwhelming number of lip augmentations is done in women with only an occasional man ever having the procedure. The reasons for this is the obvious preference for fuller and larger lips in women from a fashion and beauty perspective. While fuller lips in men can also be attractive, it is not a primary facial feature that necessarily makes for a strong masculine appearance. The other reasons lip augmentations are done a lot less in men is that they, in general, are less tolerant of the injectable experience. 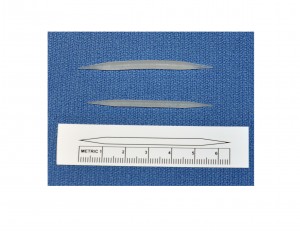 Lip implants offer a permanent option for lip augmentation. Over the years, a variety of implant types have been available for subcutaneous tissue implantation, all of which have been different forms of polytetrafluorethylene materials. All of these materials have been withdrawn from the market with mixed clinical results. Permalip (Surgisil, Plano, Texas) is a relatively new implant designed for the lips made of a very soft (low durometer) formed silicone material. Because of its very smooth surface and tapered design, it is easily reversible should that be desired in the future.

Case Study: This 45 year-old male was undergoing a variety of procedures for facial enhancement and was interested in doing a permanent lip augmentation at the same time. Options discussed included fat injections, a lip lift, an internal mucosal advancement and silicone lip implants. He wanted the simplest but the most reliable method that would ensure a sustained augmentation effect. 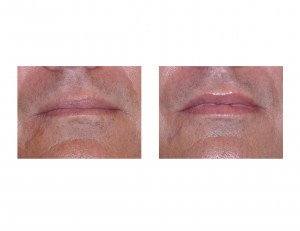 At the completion of his other facial procedures, both the upper and lower lips were infiltrated with a lidocaine solution that contained epinephrine. Small 5mms incision were inside the corners of both sides of the mouth in the mucosa and scissors used to make an intramuscular tunnel to the midline in both the upper and lower lips. A fine curved grasping instrument was then passed from one side of the lip to the other through the incisions and a 5mm implant was placed in the upper lip and a 3mm implant in the lower lip. Both implants were 65mms long. The incisions were closed with small dissolveable sutures. 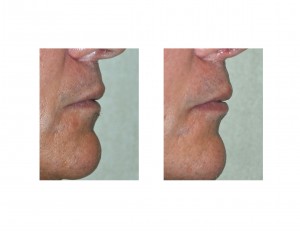 After surgery he did develop the typical significant lip swelling that is typical from implant passage through the lips. Some bruising occurred on the left upper lip but in other lip quadrants. His lip achieved their final size at 3 weeks after surgery which remained unchanged three months later.

1)      Lip augmentation in men is uncommon and they are less likely to choose temporary injectable fillers.

2)      Silicone implants (PermaLip) offers a permanent option for lip augmentation when one has tried and/or does not prefer injectable fillers.

3)      Silicone implants slide easily into place through small incisions at the corners of the mouth and are available in sizes of 3, 4 and 5mms diameters with lengths from 55mm to 65mms. Men will almost always need the longest lengths.