Background: The shape of one’s skull is not often thought of as a major cosmetic issue. Much of this is because it is largely hidden by hair in most women and in many young men. But with hair loss in men and the contemporary hairstyle of total scalp shaving, the shape of one’s skull and upper forehead can take down a more dominant visible role. The overall size of the skull is actually greater in surface area than that of one’s face. And, unlike the face, it is generally desirous to be more of a smooth oval rather than have a lot of indentations and irregularities.

Reshaping of one’s skull can be done by either bone reduction or augmentation by onlay materials. By far, more significant changes can be made in the shape of an adult’s skull through addition rather than subtraction. Such cranioplasty procedures have been historically done through an open scalp (coronal) approach. By making a long transverse scalp incision, the scalp tissues can be widely elevated providing wide open exposure and an unobstructed working field. When one has a skull deformity as a sequelae of a prior neurosurgery or craniofacial procedure, the use of a pre-existing scalp incision makes the decision easy to proceed with skull contouring. In the absence of a prior scalp scar, however, the decision to undergo any form of skull reshaping is complicated by the scar’s cosmetic trade-off. 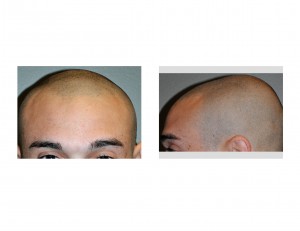 Case Study: A 25 year-old male wanted skull and forehead reshaping due to some cosmetic irregularities. He had a pair of grooves or indentations on each side of the midline of his skull that ran from the back of his head to the middle of the forehead. These depressions were visible given his receding hairline and close cropped hair. These parasagittal linear indentations were somewhat reminiscent of a ‘miniature’ or micro- form of sagittal craniosynostosis as noted by a midline ridge along the sagittal suture and restricted bone growth perpendicular to it along its length. He has trouble wearing hats as his narrow forehead allowed the hat to fall down unsupported to his brows.

These parasagittal skull grooves could be easily augmented through a traditional open cranioplasty approach. Understandably he did not want the scalp scar given the modest nature of the skull problem. An alternative approach of an injectable cranioplasty procedure was devised that could be done through very small incision but yet could add material over the entire lemgth of the skull defects. Such an approach, while not possible with the use of traditional cranioplasty materials such as acrylic and hydrozyapatite, can be done using the newly FDA-approved Kryptonite bone cement. 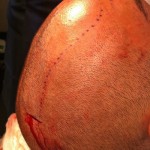 Prior to the procedure, an outline of the skull depressions were marked on both sides. Clay modeling material was used to fill in the defects and shaped. They were used to give an estimate of how much material would be needed to fill in the defects from front to back. The patient was taken to the operating room where a small one inch incision was made at the back end of the linear  depressions. Long curved elevators were used to raise the scalp tissue off of the bone in a subperiosteal plane within the confines of the skin marks. The pocket was the washed out with antibiotic solution. On each side, 10 grams of Kryptonite bone cement were then injected from front to back using a syringe and a long 12 French plastic catheter. The material was shaped externally by molding with fingers to get smooth edges and sn even fill of the skull depressions to the surrounding skull bone. Once set after 10 minutes, the incisions were closed with small dissolveable sutures. Total operative time was one hour and was done as an outpatient procedure 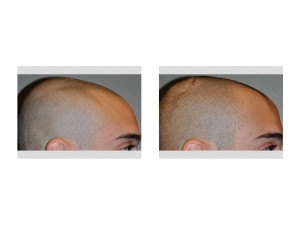 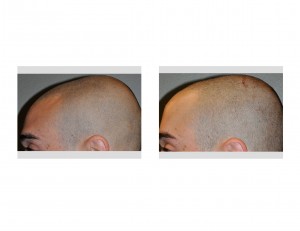 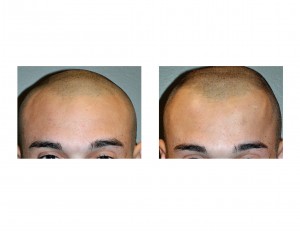 When seen the next day, he reported only a mild headache for a few hours after surgery. He took no pain medications at all. His swelling was mild as expected and he had no bruising. The effects of the skull contouring was immediately evident and pleasing. However, swelling remains and the final outcome of the procedure will take several months before its true success can be judged. What the procedure does illustrate is that it is possible to do select cranial augmentation using this method. It is fairly simple and the patient will have a quick recovery.

For more modest skull contour deformities where a long scalp incision would be cosmetically unacceptable, the injectable cranioplasty method is a viable method. It is made possible with the flow characteristics of Kryptonite bone cement that have not previously existed with prior cranioplasty materials.

1) Skull irregularities and contour depressions have traditionally used an open scalp incision with its own cosmetic scar trade-off.

2) Injectable cranioplasty uses very small incisions that can fill in a large surface area through a long flexible filler tube. It is a procedure that is technique sensitive and intimate working knowledge of how the Kryptonite material flows and sets, and the time frame on which it happens, is needed to ensure a good result.

3)Cosmetic skull reshaping by augmentation is now possible with the minimally invasive cranioplasty (MIC) procedure. Further work is needed to define the procedure to avoid undercorrection and, most significantly, any risk of overcorrection.