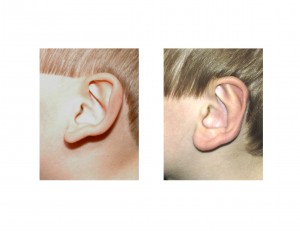 Background: Otoplasty for protruding ears is primarily done by cartilage reshaping/repositioning. Whether it is the placement of antihelical or concha-mastoid sutures, the ear is ‘pulled back or ‘pinned’ by cartilage manipulation. The use of these suture techniques is primarily an art and how many are used, placed and their degree of tightening is a matter of intraoperative judgment.

Despite the plastic surgeon’s best intent in some cases, the ears may not be pulled back far enough or may be pulled back too far. Undercorrection, whether done early or late, is an easier problem to improve by the placement of additional sutures. Overcorrection of the protruding ears, however, is a different matter. If treated early (within weeks or a month or two from the initial surgery), release of some of the sutures or replacement of them can be effective. Once scar has formed between the postauricular cartilage surfaces and/or the cartilage has lost memory, suture release will not create an otoplasty reversal. (partial)

A delayed  otoplasty reversal requires an interpositional graft to be placed between the released cartilage folds. While effective, few patients want to have a cartilage graft harvested to help the ears sit back out three to five millimeters. Ideally the cartilage graft should come from the end of one of the free floating ribs…a concept that even makes it less appealing.

Case Study: This 30 year-old female had an original otoplasty severn years ago that was undercorrected. He then had an otoplasty revision to set the ears back further. This resulted in an overcorrected problem  He had a third otoplasty procedure years later to bring the ears out further but it was not successful. To the best of his knowledge it was procedure to release the sutures. 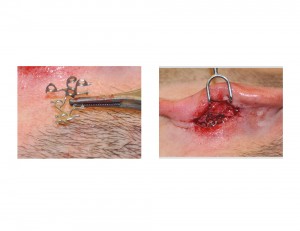 Under local anesthesia, the central portion of his postauricular incisions was reopened and the scar tissue between the cartilage folds released. A small titanium mesh plate (1mm profile) was cut into a small clip-like shape and bent at 90 degrees. It was then wedged in between the released cartilage folds and sutured into placed. The skin incision was closed with small dissolveable sutures. 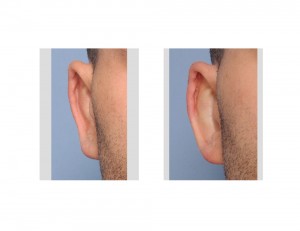 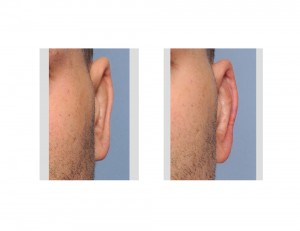 His immediate after surgery pictures showed a modest (3mm) increase in his ear projection which was maintained. The push of the metal plate maintained the cartilage position as new scar tissue was formed.

Partial otoplasty reversal can be successfully done using a small metal insert to hold the ear out. This effectively replaces the need for a cartilage graft as an interpositional spacer.

1) An otoplasty is said to be overcorrected when the helical rim is pulled behind the antihelix.

2) Partially reversing an otoplasty can not be done secondarily after the first few months after surgery by releasing the original cartilage sutures.

3) A delayed reversing otoplasty requires a method to hold the cartilages apart of which a small metal plate or ‘spring’ can be effective.