Background: There are a wide variety of head shape concerns that exist from the top, back, front and sides of the head. Such concerns may be that certain skull areas are too big, too small, asymmetric or just oddly shaped. While almost all aesthetic skull shape concerns are improvable, some are more improvable than others.

One very improvable head shape concern is that of a wide side of the head. This is usually where there is undesired convexity above the ears. The person desires a less wide or straighter frontal profile of their head shape on the sides. This almost always is a male concern often in those who shave their head or have closely cropped hair. Although I have occasionally seen this concern in men with greater amounts of hair coverage. I have yet to see a female with these side of the head shape concerns, greater hair coverage is undoubtable the reason.

While the temporal bone makes a contribution to the fullness at the side of the head, it has limited ability to be reduced. The overlying temporal muscle, however, is a different matter. The muscle in the posterior temporal area is much thicker than most people realize and its selective removal results in no functional consequences.

Case Study: This male was bothered by the side shape of his head, specifically that area above the ears. He felt it stuck out too much and wanted a flatter and straighter shape from the ears up to the temporal line at the transition of the side and top of the head. 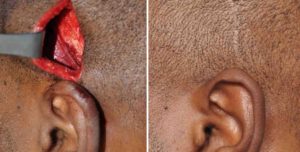 Under general anesthesia a 3 cm incision was made just above the ears. Through this incision the entire posterior temporal muscle was removed. A long-term assessment of his incisional scar (two years) showed it had healed to the point that it was undetectable. He had no early or long-term functional problems with chewing or opening and closing his mouth. 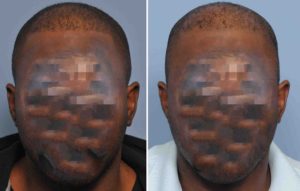 His results showed that removal of the posterior temporal muscle alone results in a flattening of the profile of the side of the head. No bone removal is necessary. While temporal reduction surgery is done today by an incision behind the ear in the postauricular sulcus, an incision placed above the ear in a more visible location can still heal imperceptibly.

1)  A too convex or wide side of the head has a significant temporal muscle component to it in most cases.

2) A posterior temporal muscle procedure can change the shape of the side of the head from convex to straight.

3) While incisions in the exposed part of the temporal region are rarely used in temporal reduction, they can make for a minimal scar appearance.