Background:Moles are very common skin manifestations. These well known and recognized colorations are concentrated collections of pigment cells in the skin that have coalesced to create a visible growth. Almost everyone has at least one and most people have an assortment of them located randomly throughout their body. The face is a common location for moles and they attract attention for both their aesthetic and potentially malignant concerns. For some, the facial mole is perceived as a beauty mark rather than an aesthetic liability.

A mole has been comedically referred to as ‘freckle’s ugly cousin’. In reality, they are benign skin growths that do not appear until early childhood and continue to appear for the first several decades of life. By the time one is an adult, most people have dozens of them. With age, some moles change in color or become slightly raised. Some will even develop a hair or two growing out of it.

But the congenital nevi is a different mole species because it is present at birth. They occur in about 1% of infants with about 20% of them occurring in the head and neck region.The main difference in the congenital nevi and the garden variety mole is that it is usually larger and has hypertrichosis. (hair growing out of it) The cells of the congenital nevus always goes much deeper and can extend down into the hair follicle and even into the subcutaneous fat. Most commonly, congenital nevi are removed because of their appearance although there is a low risk of long-term development of melanoma in them. The risk of that happening is very low (1% or 2%) but the exact rate of malignant transformation is not precisely known. 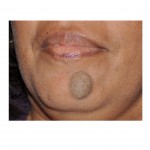 Case Study: This 40 year-old Hispanic female came in with a large ‘mole’ on her chin. She said she had it since birth and its size has only changed as she has grown. It had a large number of hairs in it that she has to shave every day. She wanted it removed regardless of the how the scar looked later. She was advised that scars can widen over the chin area and the need for a secondary scar revision was possible given its size and the wound tension it might be under with its total removal.

Under local anesthesia in the office setting, her chin nevi was completely excised in a vertical elliptical fashion. Surprisingly, the wound closure was not under as much tension as I would have predicted. Hairs could be seen extending right into the normal skin area. Their bulbs were amputated so the normal skin would be preserved but no hair would grow again. The nevi was not sent to pathology at the patient’s request due to cost considerations and there were no obvious concerns about its appearance. 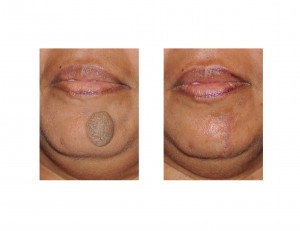 Despite her pigmented skin, her early scar formation was surprisingly negligible. The scar line was barely visible even at a few weeks after surgery. She was understandably thrilled. It unfortunate that she spend much of her life suffering stares and embarrassment when its removal could so simply be done.

· Small moles of the chin are common but large ones are rare. They usually have a substantial numbers of hairs in them as they are birthmarks not an acquired skin lesion.

· Large congenital nevi have a higher lifelong risk of melanoma and should be removed early in life when possible.

· Vertical elliptical excision of chin nevi is preferred when the orientation of the nevus will allow it. The scar trade-off is generally very favorable.