Background:  Plagioephaly is a well known skull deformity that is marked by an asymmetry of the circumferential skull shape. This is most commonly manifest by a flatness on the back of the head with varying degrees of asymmetry of the forehead as well. It is almost always that the back of the head is flatter than the front and, as a result,  is the main focus of most patient’s attention and treatment.

Regardless of the degree of occipital flatness/asymmetry, a custom implant is the preferred treatment. Its exactness in the amount of bony augmentation needed and the ability to be placed through the smallest scalp incision possible pass the two most critical needs of an aesthetic skull reshaping procedure.

In reality it is also common that the normal occipital side is not really that normal. There may be compensatory overgrowth to some degree (more accurately, shifting of the bone mass) as the brain seeks adequate intracranial space during development. But in most cases its treatment with a bony reduction requires a longer incision and the degree of overgrowth would have to be considerable to justify that extra effort. 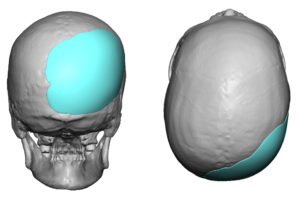 Case Study: This young male was bothered by the flatness on the one side of the back of his head. Given his short haircut the right plagiocephalic appearance was very apparent to him. A 3D skull CT scan showed the back of the head asymmetry from which a custom plagiocephaly skull implant was desiged.

Under general anesthesia and in the prone position, the perforated implant as placed through a less than 7 cm scalp incision placed in the low occipital area.

His long-term postoperative result (1 year) showed an improved shape to the back of his head with a very well healed scar that was barely detectable.

While he had a very good result plagiocephalic skull reshaping surgery is never perfect. The computer design process does not factor in whether there are overlying scalp thickness differences…which there almost always are eve if they are quite modest. This raises the question of whether there should be some slight overcompensation in the implant design to account for it.

1) In the majority of plagiocephaly cases the patient prefers augmentation of the flatter side of the back of the head.

2) The most accurate method for augmentation of an asymmetric skull is a prefabricated implant made from the patient’s 3D CT scan of their skull.

3) An unknown question is whether the skull  implant design should be based on just the asymmetry of the skull bone or whether it should be ‘overbuilt’ to compensate for overlying soft tissue deficiencies.