Background: Perhaps to the surprise of many, men make up a significant percent of aesthetic skull reshaping patients. This is due to the show of the skull shape that occurs with shaved heads, closely cropped hairstyles and thinning hair cover. Men become exquisitely aware of any prominent bony areas or indentations or deficiencies.

One of these aesthetic skull shape issues is that of the prominent sagittal ridge. This midline raised ridge, which occurs mainly along its posterior aspect, is easily seen as the highest part of the skull. The ridge creates a peaked or more triangular shape to the top of the head rather than that of more of a convex shape.

Sagittal skull ridge reduction is done by a burring technique. While this technique is very straightforward, its effects are limited by two factors. The bone can not be reduced by than just into the diploic space. Once the diploic space is entered significant bleeding occurs and this can lead to fluid collections that develop under the scalp after surgery. Because of the visibility of the scalp on the top of the head, the incision used to access the sagittal ridge must be limited. This can influence the extent that the sagittal ridge can be reduced.

Case Study: This 35 year-old male presented with a prominent sagittal ridge closer to the crown of the head. On the most posterior aspect of the sagittal ridge there was an indentation or dip between two areas of the raised sagittal ridge. 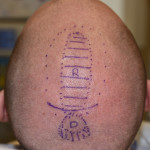 Under general anesthesia, a curved scalp incision of 7cms was made perpendicular to the sagittal ridge on its back third. Through this incision the sagittal ridge was reduced by 5ms along its length. At the area of the dip, 2ccs of hydroxyapatite bone cement was applied to raise it up to the surrounding skull contour. 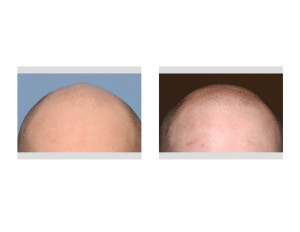 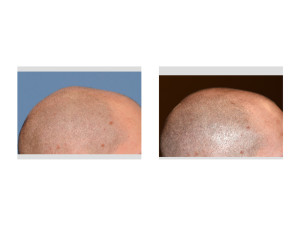 A head dressing and drain was removed the following day. The change was immediately seen in the skull contour with a successful sagittal ridge skull reduction.

2) The limits of the sagittal skull ridge reduction is the thickness of the bone and the length of the incision permitted by the patient.

3) Sagittal skull ridge reductions can usually be reduced from 5mm to 7mms.