Background:  Tummy tucks, or an abdominoplasty, is one of the successfully proven methods of abdominal and waistline contouring. The foundation of a tummy tuck is the removal of a segment of loose skin and fat, a horizontal ellipse that is taken out below (mini-tummy tuck) or above the umbilicus. (full tummy tuck) Other adjunctive techniques that contribute to the final result of a tummy tuck include rectus muscle plication and liposuction.

Liposuction is an important part of a tummy tuck and is used in almost all cases. Liposuction can reach fat areas that lie beyond the excision and pull of the abdominal tissue that is removed. Few patients that need an abdominoplasty don’t have fat bulges in adjoining areas. One very common area of fat excess is in the upper abdominal area between the belly button and the bottom of the rib cage. This is outside of the area of the skin and fat that is cut out and can have quite a thick fat layer. Some of this thickness is thinned out as the skin is pulled down from below. But this initial fat thickness is the reason some tummy tuck patients have a residual upper abdominal bulge that is not as flat as the lower abdomen after surgery.

Some plastic surgeons will liposuction the upper abdomen during a tummy tuck to thin it out while others will not for fear of impairing the blood supply to the healing skin and incision below. My preferred approach is the latter as necrosis of the lower skin flap, while uncommon, is a nightmare for all involved should it occur.

The long-term results of most tummy tucks are based on how successful one is at keeping fat from re-accumulating and thickening the skin flaps and the contour of the waistline. Unless a woman gets pregnant after a tummy tuck, skin excess will not be recreated. 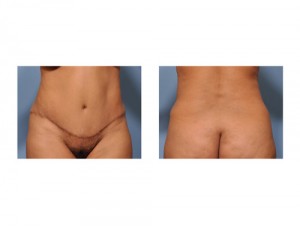 Case Study: This is a 48 year-old female who had a full tummy tuck over 6 years ago. As she has gotten older and gone through menopause, she felt she had gotten ‘thicker’ though the waistline and abdominal area. She wanted to redefine her waistline again through liposuction and become overall more sculpted again. 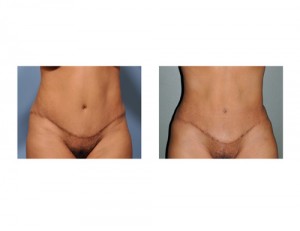 Smartlipo was used to perform her liposuction due to the anticipation that she would have some scar from her prior surgery. Her entire upper and lower abdomen and her flanks into her back were initially treated with 30,000 joules of energy prior to suctioning. A total of 2,200cc of aspirate was obtained which was more than I would have thought going into the procedure. 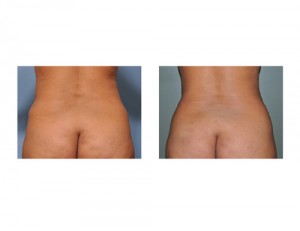 After three weeks most of her swelling and the little bit of bruising which had occurred was largely gone. Her recovery from her secondary liposuction compared to her original tummy tuck was in her estimation a ‘1’ compared to the first ‘10’.

Every patient who undergoes a tummy tuck should be aware that secondary liposuction may be desired. Whether it is to thin out a still full upper abdominal area or to take down fat reaccumulations years later, touchups or revisions using liposuction can be beneficial I preoperatively advise all of my patients of this potential reality. While a tummy tuck is a great procedure, it is not always perfect nor is it always completely permanent.

1)      Tummy tucks produce significant changes in the contour of the abdomen and around the waistline. Having a completely flat abdomen, particularly the upper part, may not always be possible given the thickness of fat tissue in this part of the abdominal skin flap.

2)      The residual thickness of fat in the upper abdomen or the accumulation of fat with weight gain after a tummy tuck, even years later, can mar a well-defined waistline and abdominal shape.

3)      Liposuction may be needed after a tummy tuck as a secondary procedure to thin out the abdominal skin flap to obtain optimal contouring or may need to be much later to restore the previous shape of a tummy tuck from fat re-accumulation.