Background: Sleep apnea is a well known nocturnal disorder in which one’s breathing is either very shallow or actually pauses during sleep. It is the length of these breathing pauses that are significant as they result in a drop of one’s oxygen levels due to decreased air intake. This creates a variety of medical problems not the least of which is daytime drowsiness. Definitive diagnosis of sleep apnea requires a sleep study or polysomnogram.

There are different causes of sleep apnea but by far the most common is located in the nasal or oral airway, known as obstructive sleep apnea. (OSA) This is where one’s breathing is interrupted by an actual blockage to the airway which is evident by snoring due to the turbulent flow of air around the obstruction. There are many risk factors associated with OSA including being overweight, smoking, age, male gender, large tonsils adenoids and diabetes.

OSA has been treated by a wide variety of surgical procedures as secondary treatment options when either CPAP fails or is not desired. These all address obstructive elements along the nasal and oral airway and can include septoplasty and turbinate surgery, tonsillectomy and adenoidectomy, uvulopalatopharyngoplasty, soft palate pillarplasty, radiofrequency base of tongue treatments, genioglossus base of tongue advancements, hyoid bone myotomy and suspension and maxillomandibular advancement surgery. Moving the upper and lower jawbones forward can be the most effective OSA surgery because it increases the posterior airway space although it is the most invasive.

In OSA patients that have a short jaw (and an obvious short chin), it is easy to see how moving the jaw forward will carry the base of the tongue with it. This opens up the airspace behind the tongue or at least adding support for the tongue to not fall back as much when one lays down. But in the patient with a short lower jaw who does not want to move the whole jaw forward, will just a sliding genioplasty help?

Case Study: This 48 year-old male had documented OSA but was not particularly compliant with CPAP. He had a moderately short lower jaw that measured an 8mm  horizontal distance between his upper and lower incisor teeth. (8mms overjet) In profile his chin was short and he had a thicker bullish neck. He was moderately overweight.

Under general anesthesia, an intraoral approach was used to access the bony chin. A sliding genioplasty was performed and the chin bone was brought forward 16mms and vertically lengthened by 4mms. It was secured by a 2.0mm titanium step plate with two screws above and below the osteotomy cut. Due to the large chin advancement, additional plates and screws were placed on the sides of the chin for additional stability. The mentalis muscle was resuspended and the intraoral incision closed. 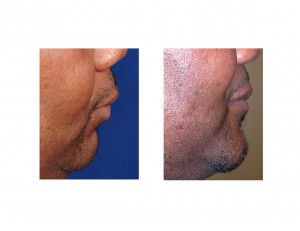 After surgery, he had an immediate improvement in his OSA symptoms by polysomnogram testing. His apneic episodes dropped by over 70% and his oxygen saturations did not drop below 93%.at any time during the test period. His chin profile showed a substantial change although the amount of chin projection did not look a great as the amount that the bone was moved. 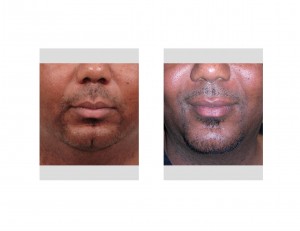 A sliding genioplasty is the most extreme form of a genioglossus advancement. The genioglossus muscle remains attached to the lingual cortex of the downfractured chin segment and is carried forward as the bone is moved. While there is no exact known measurement that the genioglossus needs to be moved forward to create posterior airway space improvement, one would suspect that it would need to be at least 10mms. It is no surprise then that a 16mm chin advancement offers some improvement in OSA symptoms.

1) A sliding genioplasty moves the chin bone forward and with it comes the attachment of the geniglossus muscle which pulls on the tongue.

2) Forward tongue positioning may be beneficial  in some select cases of sleep apnea associated with a posterior airway obstruction due to tongue collapse.

3) In patients with a short chin who have sleep apnea, a sliding genioplasty may provide sustained reduction in airway obstructive symptoms.