« The Need For Bariatric Plastic Surgery After Gastric Bypass
Otoplasty For Protruding Ears: Matching The Cartilage Problem With The Surgical Technique »

Background:  The gummy smile is when excessive soft tissue (attached gingiva) is shown during upper lip animation. Ideally, when more than 1mm of gingival shows it is deemed aesthetically excessive although it probably is only bothersome to most people when it is more than 2 or 3mms. The cause of almost all gummy smiles is vertical maxillary excess, the maxilla is too vertically long for the amount of lip tissue.

In many gummy smile patients, the maxilla is not long enough to justify a LeFort I or maxillary impaction. Only when the amount of gingival show exceeds more than about 7mms can bone shortening be worth the effort. This leaves a large number of patients to seek out a potential soft tissue or upper lip lengthening approach. 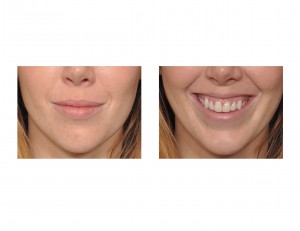 Case Study: This 23 year-old female had long been bothered by how much gum she showed when smiling. She had a very broad smile width and the upper lip pulled high up against the face of the maxilla. At maximum smile, the amount of exposed gingival was 9mms. She had an excellent Class I occlusion so the thought of vertical maxillary shortening was understandable not acceptable. The expectation with any soft tissue lengthening procedure was to decrease the amount of gummy smile by half. 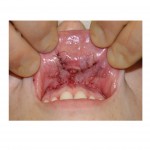 Under local anesthesia (infraorbital nerve blocks) supplemented with some IV sedation, a large v-shaped mucosal flap was incised and raised on the inside of the upper lip. One of the levator muscles of the upper lip (quadratus superior nasi) was transected across the base of the nose with this exposure on each side. The v-shaped flap was then advanced and closed in a V-Y pattern to create internal lengthening and increased vermilion fullness. An excision of upper lip mucosa and mucoperiosteum on the face of the maxilla was then done to create a vestibular shortening effect as well. 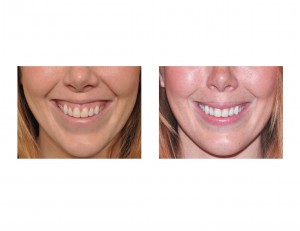 At six weeks after surgery, all upper lip swelling was gone and the patient had a stable result. She had achieved a 7mm reduction in exposed gingiva with unrestricted and natural movement of the upper lip.

The best result for soft tissue correction of the gummy smile addresses three parts of the upper lip anatomy. The internal mucosa of the upper lip is increased with a V-Y flap. The central upper lip elevator muscle is transected to partially deanimate upper lip movement. The depth of the upper lip vestibule is shortened to help resist upward scar contracture.

1) Soft tissue correction of the gummy smile can be done when the maxilla is not excessively long as demonstrated by lip competence at rest. The gummy smile is apparent with smiling.