Background: While skull surgery has been around for more than a century, such surgeries have been done for reconstructive reasons to replace missing portions or correct significant congenital skull shape deformities. Aesthetic skull surgery, however, is much more recent and consists of reducing prominent bony areas or improving its shape through augmentation materials. The use of custom implants made from the patient’s 3D CT scan is the most effective skull augmentation material today.

One of the more common aesthetic skull deformities that is treated by a custom implant is that of the crown. The crown refers to the area at the upper back of the skull. It begins at the point where the top of the head begins to curve downward to the back of the head and ends at a point just above the nuchal line of the occipital bone. It is semi-circular in shape.

A crown skull deficiency is a common female concern and is often manifest by hairstyle manipulations to camouflage a deficiency or in an effort to make a normal crown look even higher. The commonality of this head shape concern is evident in the commercial product known as a ‘Bumpit’ which serves as an external prosthetic means to make the hair on the crown area look higher or fuller. 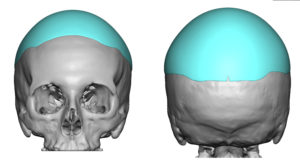 Case Study: This young female had long been bothered by the flatness over the crown of her head. She was tired of teasing her hair up to improve the appearance of her head shape. While the crown area looked flat, one could put their hand on it and it felt like a large flat circular area. Because she lived in another country and could not obtain a 3D CT scan, a true custom skull implant could not be made. Instead, I used an implant design from my large custom skull implant catalog from other patient designs. The implant design chosen covered the area needed and had a central projection of 15mms. Given the the skull is a convex surface and the implant had some flexibility to it, it was presumed that it would have a good fit.

Under general anesthesia and in the prone position, a low horizontal occipital incision was made and a subperiosteal pocket developed up over and beyond the crown of her head. Sitting the implant on the patient’s head it could be seen that it had the right shape and projection where it was needed. Placing the implant showed a fit and degree of improvement like it was custom made for her. Even though the implant had multiple perfusion holes placed and its fit into the pocket was very tight, two microscrews were placed to ensure complete stability

While a custom made approach to implant fabrication for augmenting aesthetic flat skull contours is always ideal, certain types of skull augmentations may be able to be done with preformed skull implants. The crown of the head is one of the most amenable to this approach even that its surface area of coverage needed is fairly standard. The amount of implant thickness that the typical female scalp can stretch is also well known by experience and that is usually up to 15mms of central projection.

For those females that have a crown skull deficiency, this type of ‘bumpit’ implant that is performed may work well for their aesthetic needs. Not having to get a 3D CT scan and have a custom implant designed does lower the overall cost of the surgery.