In many ways chin reduction shares the same contrast that breast augmentation and breast reduction surgery do. When expanding out the underlying structural support the overlying soft tissues benefit and are not commonly a limiting factor in the aesthetic result. (obviously in cases of severe breast sagging this is not true) But in structural support reduction the soft tissues become a liability and must be addressed or soft tissue redundancies will result marring the aesthetic outcome.

As a result in many chin reduction surgeries two fundamental soft tissue problems must be avoided…the creation of chin ptosis (sagging of the soft tissue chin pad off of the bone) and submental fullness. (the pushing of soft tissue excesses under the chin) In nay cases this requires either some excision of the soft tissues with a tuck. This comes more in older patients and in cases of more significant bony chin changes.

Case Study: This young female was bothered by her protruding chin. She had no concerns about the shape of her chin. By measurement she needed a 7mms horizontal bony reduction with some side tapering to maintain the current shape of her chin from the front view.

Under general anesthesia, a 3.5 cm skin incision was marked just behind the natural submental skin crease. It is important that this incision never extend beyond a vertical line drawn down from the corner of the mouth as it crosses the inferior border into the neck. By doing so it will not ever be seen from the side view. The soft tissue chin pard is degloved off of the bone and a measured horizontal bony chin reduction done by high speed burring. This takes it down into the marrow of the chin with total decortication with this amount of horizontal bone removal. The bleeding is controlled by the application of bone wax. To keep the chin from becoming too square the sides of the chin bone need to be tapered as well. 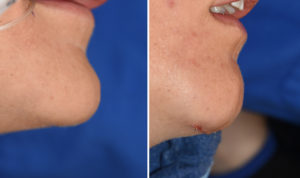 Redraping of the soft tissue chin pad requires a removal of full thickness skin and fat to prevent a ptosis problem. This removal is actually not done from the actual soft tissue chin pad itself as it may cause the incision to move further anteriorly and too far forward where it may be seen. Rather it is done from the new tissues on the inferior or downward side of the incision to keep it properly tucked in the most concealed position.

In this example of a ‘straightforward’ horizontal chin reduction of some significance, the intricacies of reshaping the bone and excising/tucking the soft tissue leave a lot of opportunity for some minor aesthetic postoperative issues (smoothness and evenness of the bone, idle soft tissue tightening and scar appearance) Patient should be aware that this risk is not rare and there is a need for secondary touchups of these potential issues.

1) Chin reduction remains the most challenging of all chin surgeries because it must surgically manage both bone and overlying soft tissue issues.

2) The submental chin reduction approach allows line of sight reduction for the inferior bony border and a method for soft tissue reshaping.

3) The risk of the need for secondary revision in chin reduction is high, approximating 50% in many patients.