Whether one’s eyes are too close together or too far apart is an occasional question that I get from prospective patients for correction. While there are numerous camouflage maneuvers that can make the eyes appear closer together (inner eye corner repositioning, nasal bridge augmentation), there are no such camouflage procedures that can make the eyes appear further apart.

When patients inquire about a surgery that truly corrects the underlying eye position problem, they are referring to a long-standing craniofacial operation  known as orbital translocation. This craniofacial procedure was originally devised decades ago for the treatment of congenital hypertelorism to bring eyes that are too far apart closer together. Although it can similarly be done to move the eyes further apart.

What I tell patients is that this bony orbital operation is for the highly motivated patients due to what is required in performing it. A review of the techniques in orbital translocation or orbital box osteotomies will be illustrative of the magnitude of the surgery. 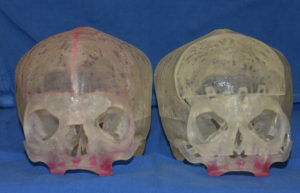 The first step in the operation is the need for a full coronal scalp incision and the need for a frontal craniotomy to expose the orbital bones. The concept is then to cut the orbital bones in a box pattern from the underlying maxilla, remove a wedge of bone from the central nose area (in adults a central strip of frontal nasal bone would be left intact and the bone removed in a parasagittal pattern from its sides) and then move the orbital boxes closer together (in hypertelorism) or further apart. (in hypotelorism) The attached diagrams and models show an example of a hypertelorism repair in a teenage female.

The key point in the aesthetic eye spacing concern patient is that this is a major operation which has its own aesthetic tradeoffs. (scalp scar, extent of surgery, skull or orbital bony irregularities) and may require a secondary surgery to manage any of these secondary issues. For these reasons this is why I say it takes a tremendously motivated patient to have this orbital box surgery (hypertelorism repair approach) for an aesthetic eye spacing concern.