Background: Testicular implants have been around for decades and have had their primary use as replacements for a lost testicle.Whether due to failure to descend or removal due to trauma, infection or a malignancy, the absence of a testicle produces scrotal asymmetry which can negatively affect some men. The placement of a testicular implant offers an effective solution whether it is a fluid-filled device (saline) or a solid silicone one. The implant surgery is straightforward, highly effective and offers a fairly quick recovery.

Unlike a lost testicle, some men have an intact pair of them but are bothered by their small size. The average size of a testicle is reported to be 4 x 3 cms with volumes between 17 and 22mls. They are well known to be of slightly different sizes with the left slightly smaller than that of the right. The perception of size may also be influenced by their differential suspension levels with the left often hanging lower than the right.

The widespread use of testosterone hormone therapy is one reason for an aesthetic concern of small testicles as one of its well known side effects is a decrease in testicular size. While this is not the only reason for a below average testicle size it has become one of the more common ones today with the use of numerous male enhancement compounds. Unlike the missing testicle patient what does the man do who has testicles but desires an increase in their size?

Case Study: This middle-aged male had concerns about his testicle size which had decreased after testosterone therapy. His current testicles measured 3.5cms in length. His desire was to increase their size to almost double, up to 6cms in size. He had a lot of loose scrotal skin so he felt he could accommodate that size increase. 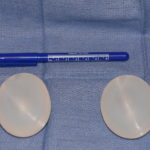 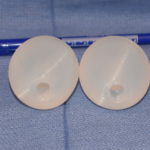 Custom testicular enlargement implants were designed of a low solid silicone durometer that had a hollow center and an open area at one end. While at 6 cms in size their material consistency provided flexibility for reshaping them as needed for the exit of the vascular pedicle/vas deferens/spermatic cord as well as its inner diameter. 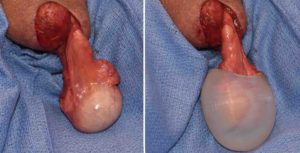 Under general anesthesia, an 4 cm midline skin incision was made in the scrotal raphe on its over half. Bilateral dissection was done through the dartos and cremasteric muscle until the tunica vaginalis was encountered. The tunica was opened and the testicle and its superior pedicle delivered out of the scrotum. The end of the implant was widened so as to permit no pressure on the testicle and his pedicle. Taking care to prevent twisting of the pedicle the testicle was laid into the center of the implant by gently stretching its opening. The testicle and its implant wrap were returned back into the scrotum and all layers closed back out to the skin.

Testicular enlargement is possible by the use of special designed testicle implants that envelop rather than replace an existing testicle. The scrotal sac stretch capacity is considerable although I find that a size increase to 6cms is about the limit for most men. Initially one should expect, like any implant placed in the body that almost doubles in size what it is enlarging, that the scrotum will feel very tight, hard and unnatural and will takes 4 to 6 weeks to relax and feel and look more normal.

2) A testicular enlargement implant envelops the existing testicle essentially doubling it in size.

3) A midline raphe scrotal skin incision is used for placement of bilateral implants.