« The Lumps and Bumps of Liposuction Recovery
Case Study: Upper Blepharoplasty and Browlift For Vision Obstruction »

Background:  The shape of the upper arm is primarily determined by the front (biceps) and the back (triceps) sides of it. While men are notoriously concerned about the biceps region, women are much more concerned about the opposing triceps region, particularly as they age. Loose and floppy skin on the back of the arm affects many women and a desire to undergo some treatment for it is common.

For minor amounts of upper arm fullness or loose skin, liposuction or non-surgical skin tightening can be effective. While armlifts create the most dramatic change in the shape of the arm, it should only be employed in the most severe sagging arm cases. The  scar of an arm lift is simply not acceptable to most women, short of those who have had a lot of weight loss. This makes the bariatric surgery female the most likely to accept an arm scar as a better aesthetic problem than that of a low hanging skin on the back of the upper arm.

The severe sagging of many bariatric or extreme weight loss patients also presents another aesthetic problem. The amount of excess rarely stops in the arm or at the armpit. Rather it extends past the armpit down into the lateral chest wall to the side of the breasts. When planning an armlift in most bariatric patients, this excess skin outside of the arm must be factored into the excision pattern. Having a scar cross the armpit poses risks of tightening and restriction or painful abduction of the arm when lifted above shoulder level. 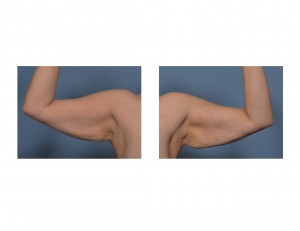 Case Study: This 40 year-old female had bariatric surgery (bypass) two years previously. She had lost over 120lbs. Besides her abdomen and waistline, her next most important concern was her arms. She was embarrassed by the floppy skin and how it swung back and forth with arm movement. She agreed to multiple body contouring procedures performed simultaneously including armlifts, an extended tummy tuck, and breast implants with nipple lifts.

During her multiple bariatric plastic surgery procedures, an extended arm lift was planned that had a cutout pattern that run from her elbow up to her armpit and then down to the side of her breasts. This was marked out just slightly in from the very backside of her arms toward the inner side of the arms. Skin and fat was excised down to the muscle fascia of the upper arm and into the subcutaneous fat of the armpit and the lateral chest wall. Closure of the long incision was done with subcuticular sutures without any z-plasty or break-up of the incision as it crossed the armpit. Drains were used for both sides. 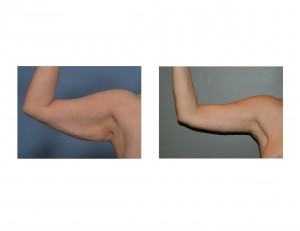 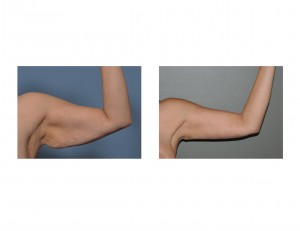 Her drains were removed five days later and she wore compression wraps for three weeks after surgery. Her armlifts results were immediate and dramatically improved. At six months after her arm lifts, she had scar that were still slightly red, had developed some widening but had no scar contracture or  restriction of movement across the armpits. Fading of the redness of her scars is expected to take up to one year after surgery. 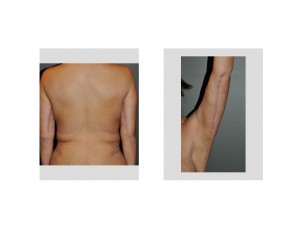 The scar location could be seen to be completely on the back of her arms which was not apparent to her. But the scars can be seen from behind by others.

1) Armlifts can produce a dramatic reduction in the circumference of the upper arm by removing excess skin and fat from the back (triceps) area.

2) The most important consideration in an arm lift is the patient acceptance of a scar trade-off. This scar is easy to accept in the bariatric patient who usually has a large amount of hanging arm tissue.

3) The best location of the arm lift scar is on the backside of the arm. This location also heals better with less scar widening than when it is placed on the inside or medial aspect of the arm.