Background:  Aging is a lifelong process that is both relentless and progressive. In the face, the earliest signs of aging occur around the eyes. Beginning with wrinkles and eventually ending up with sagging eyelid skin and brows, the eyes and its surrounding structures (periorbital region)  show the range of manifestations that occur with the aging process. Because the eyes are the most visible area seen in every human interaction, their appearance has an influence on the perception of how one is perceived by others. But aging can also affect the main function of the eyes which is to see clearly.

In the latter stages of periorbital aging, usually ages 60 and beyond, the issue of aging goes beyond merely that of wrinkles. Upper eyelid skin becomes so excessive that skin hangs down on the eyelashes, creating not only a heaviness but impinging on one’s upper visual field. Without even knowing it, one loses how much light enters the eyes and the world becomes ‘darker’  and smaller in scope. and  The amount of upper eyelid skin rolling over onto the lashes is made even greater if the eyebrows have also dropped. Sagging eyebrows push the upper eyelid skin lower, dragging the level of the upper eyelid down creating a pseudoptosis appearance. 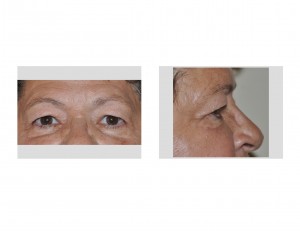 Case Study: This 69 year-old female presented with heavy eyes and an almost squinting appearance. She felt she looked tired and had a constant feeling of skin on her eyelashes. She regularly pulled up on her brows and eyelids to lift up the overhanging skin. Her eyelashes were completely covered by upper eyelid skin and were not visible. Her eyebrows were slightly below the brow bones. Visual field testing showed that almost all of her upper fields were obscured. 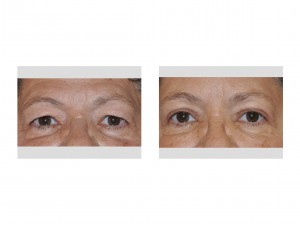 Under general anesthesia, an upper periorbital rejuvenation surgery was done. The first step in her procedure was to do a browlift. Because of her already long forehead, an open browlift was done using a hairline or pretrichial approach. Approximately one centimeter of skin was removed in the midline tapering out into the temporal areas. After the browlift, an upper blepharoplasty was done removing a large amount of skin and a small amount of orbicularis muscle. Her total procedure time was 90 minutes and she was discharged to home a few hours later. 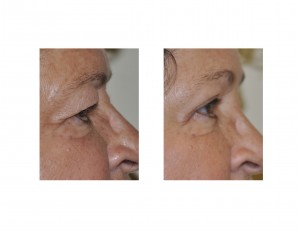 Her frontal hairline and upper eyelid sutures were removed one week after surgery. Her swelling at that point was still discernible with some small amount of bruising. When seen just three weeks after surgery, she looked completely ‘non-surgical’. Her biggest comments were in how everyone told her how much more refreshed she looked and that she could see so much better. She noted how much brighter everything looked with some much more light being seen. She has to start wearing sunglasses again when outside because of the brightness.

1) Opening up the aging periorbital region through upper eyelid tucks and a browlift can make a dramatic difference in one’s appearance and how it is perceived.

2) When considering an upper blepharoplasty (eyelid tuck), consideration must be given to the position of the eyebrow and the possible need of a browlift.

3) A good periorbital rejuvenation result makes one look refreshed and less tired but does not make one look like a different person.