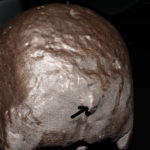 Background: The shape of the back of the head shows numerous suture lines, horizontal bony ridges and a central occipital protuberance. This normally flattened, guitar-pick shaped piece of bone sits on the downward curve of the occipital bone as it dives inward towards the foramen magnum. This piece of skull bone, known anatomically as the inion, is where the nuchal ligament and some trapezius muscle fibers attach which accounts for its very existence.

While in females the inion is unremarkable and is only seen as a very small bump on the skull, in certain males it can become more enlarged and prominent. When it is visible externally as a central bump on the bottom of the back of the head, it is known as an occipital knob. Why men develop occipital knobs is presumably due to hormonal differences and stronger muscle traction on the bony attachment.

Because of shorter hairstyles or shaving of the head, a once concealed occipital knob skull deformity can appear. Some men only discover its presence as they are loosing their hair or convert to a shorter hairstyle. Others have known it was there all along and have hidden it with longer hair or the frequent use of hats and head coverings.

Case Study:  This older male had an occipital knob skull deformity of moderate size that had bothered him for a long time. He constantly wore hats to keep it covered. Once he became aware that it was possible to have it removed, he presented for surgery. 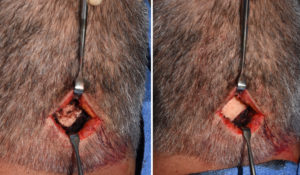 Under general anesthesia and in the prone position a small 4 cms horizontal scalp incision was made directly over the occipital prominence. After dissecting down through thick soft tissues, the bony prominence was identified and all soft tissue attachments released. A high-speed handpiece and drill were then used to burr it down until its surface was flush with all surrounding bone. A resection of overlying muscle was removed and the scalp closed. 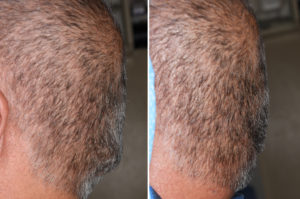 His immediate result on the operative table showed a complete elimination of the prominent occipital knob. It is not known to ever regrow once it has been removed.

1) The external occipital protuberance, also known as the inion, can overgrow and create a bulging prominence on the back of the head.

2) The prominent occipital knob can be successfully reduced through a small scalp incision.

3) The recovery from occipital knob skull reduction is very quick and any postoperative discomfort is primarily due to some neck stiffness from the muscle release.