Vertical forehead reduction can be of benefit when the hairline to brow distance is about 6.5 cm and longer. Numbers aside, one knows when the forehead is too long by their own aesthetic sense. Shortening the length of the forehead is done by moving the hairline forward or more inferior through extensive scalp undemining and mobilization. A powerful procedure, the hairline or scalp advancement can make a dramatic difference in the appearance of the upper third of the face.

Bony forehead reduction is done to either narrow the shape of the forehead or eliminate any obvious bony projections. This is a bone burring technique that is usually done to narrow the width of the forehead, reduce the amount of its forward projection (convexity) or smooth down so called forehead horns. This almost always need to be done through an open approach afforded by a hairline incision. 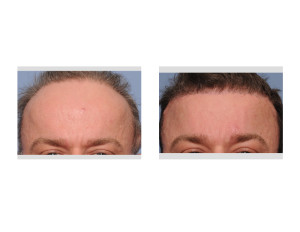 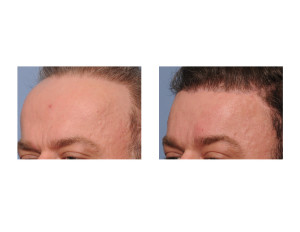 Due to his prior hair transplant harvests from the back of his head, it was elected to do a first stage scalp expansion to ensure enough scalp could be mobilized for the hairline advancement. This was done using 120cc of scalp expansion by fill volume. During the second stage through a hairline incision, the tissue expander was removed, the bony forehead reshaped by burring and the hairline advanced 2 cms. Small temporal rotational scalp flaps were also done to eliminate the temporal recession areas. 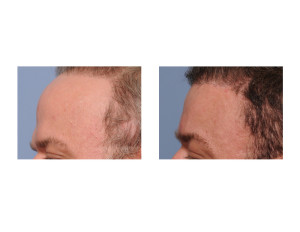 Total forehead reduction can be done through bony contouring and a hairline advancement. Using the ‘central’ pretrichial hairline incision positioned between the forehead and the scalp, both forehead reduction procedures can be successfully done. His history of strip occipital harvests for hair transplants did necessitate a first stage scalp tissue expander which would not normally be needed in most cases.

Many patients with high and long foreheads have a combination of a posteriorly recessed hairline and bony forehead bossing. Preoperative computer imaging will show whether the apparent forehead bossing is a function of just a high forehead and an exposed upper forehead bony contour or whether a true excessive forehead convexity exists. A very wide or broad forehead in the frontal view, however, is an excessive bony width problem for which a hairline advancement will not improve.