Background: There are a variety of vascular tumors that can affect the face. The most well known is that of a hemangioma, a benign proliferation of blood vessels which can originate in the skin and have a very visible outward appearance. It is usually not present and birth or may only appear as a small red spot. It starts to grow significantly in the first year of life and can become quite large and deformative of the facial area of involvement. It’s natural history is that its growth will cease and it will under involution and shrinkage leaving loose and discolored skin as an aftermath of its presence.

Arteriovenous vascular malformations (AVMs) are different from hemangioma. While falling into the general category of blood vessel tumors, they are blood vessels that have abnormal connections between the artery and veins with variable degrees of flow and shunting between the arterial and venous components. Lower flow lesions are venous on origin while higher flow lesions are arteriovenous in origin. Both types can be found in the head and neck region

Arteriovenous malformations involving the external ear are very uncommon. They rarely occur in isolation and the ear is usually involved because of a larger lateral facial malformation whose periphery encroaches onto the ear. The treatment of facial AVMs usually includes ligation, sclerosing injections or subtotal resection. But when on the ear it may be capable of complete excision .

Case Study: This 67 year-old man presented with an enlarged red-purplish ear with a cobblestone appearance. He was told as a child that he had a hemangioma although its history and appearance was more consistent with an AVM.  He had some type of surgical procedure done a long time ago but it was unclear as to what it was. He was told there was nothing that could be done for it so he had lived his whole life with it. 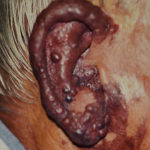 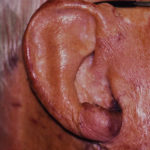 Under general anesthesia all the deformed skin on the cadilaginyus portion of the ear as well as he earlobe was removed without any excessive bleeding. The entire ear was covered with a thick split-thickness skin graft. The graft had a near 100% take creating a satisfactory total ear reconstruction.

It is unfortunate that this man did not have this procedure at a much younger age where it would have been just as successful. But his desire to have it even at this later time in life shows that, while one can live with about anything, the desire for improvement and change of a long-standing physical deformity often does not wane with age.

1) Vascular tumors of the ear deform it through skin and soft tissue malformations.

2) Excision of vascular ear tumors removes all soft tissue and replaces it with a skin graft.

3) Age is not a restrictive factor for ear reconstructive surgery as illustrated in this 67 year-old male patient.